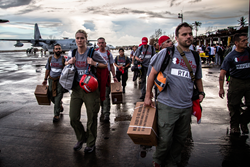 Through the development of Team Rubicon Global, we can help more disaster survivors while helping these veterans regain the community, mission, and sense of self that many have lost upon leaving the service.

Team Rubicon’s goal to replicate its disaster response model in other countries took a great leap forward this week with the first donation to Team Rubicon Global. The donation is as unique as Team Rubicon, coming in the form of 109 bitcoins from the bitcoin community. The donation wallet was created by Vaurum, a crypto-currency company based in Palo Alto.

Bitcoins are a digital currency that allow users to conduct transactions online, peer-to-peer. Like other currencies, its value fluctuates and it can be converted to cash. Vaurum’s donation wallet for Team Rubicon Global was valued at $71,500 upon conversion.

“We’re pleased with the way this campaign turned out – bitcoiners around the world came together to pitch in and help out with a very tragic situation that occurred in the Philippines,” said Avish Bhama, Vaurum founder and CEO. “Team Rubicon has put together great initiatives to help with rebuilding efforts, and the donation wallet was a simple way to facilitate donations via bitcoin – we received hundreds of contributions from anonymous bitcoiners around the world.”

The funds will be applied to engage Filipino military veterans in construction and medical projects—vital as the Philippines continue to recover from Typhoon Haiyan. Further bitcoin donations can be made at http://www.bitcoin.teamrubiconusa.org.

“Since our start four years ago, we have always sought innovative methods to improve disaster response, and provide military veterans with a renewed sense of purpose,” said William McNulty, Team Rubicon cofounder and managing director of TR Global. “Thanks to the generosity of the bitcoin community, we are better poised to help our colleagues around the world.”

Team Rubicon was founded in the wake of the 2010 Haiti Earthquake with a dual mission: to apply the skills of military veterans to disaster response; and to help ease the reintegration of veterans through continued service at home.

While initially established for American military veterans, veterans from the United Kingdom, Norway, and the Philippines have worked with Team Rubicon—including in Haiti, the Philippines, and after Hurricane Sandy in NY. Many have experienced the same difficulties transitioning from military to civilian life and a desire to continue serving.

“More than 40 countries made up the coalition in Iraq and Afghanistan, creating millions of veterans with skills and experiences that are incredibly effective during disaster,” said McNulty, “Through the development of Team Rubicon Global, we can help more disaster survivors while helping these veterans regain the community, mission, and sense of self that many have lost upon leaving the service.”

About Team Rubicon: Team Rubicon (TR) unites the skills and experience of military veterans with first responders to rapidly deploy emergency response teams. TR offers veterans a chance to continue their service by helping and empowering those afflicted by disasters, and also themselves. For more about Team Rubicon, visit http://www.teamrubiconusa.org.