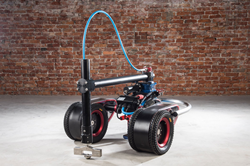 Technology, computers, robots, Artificial Intelligence – the world seems to be clambering for an ever more automated future. Therefore, it was no surprise that when the VertiDrive M3 blasting robot debuted at SSPC’s international convention earlier this year, people lined up for the demonstrations. “We exhibited two robots,” said Steven Carr, Brand and Content Manager for BlastOne, “but the VertiDrive was clearly the top draw.”

What makes this particular blasting robot so unique is its ability to climb and blast sheer vertical surfaces such as water tanks, ship hulls, and other large steel structures. Equipped with powerful magnets on each of its wheels and a continuously oscillating arm that can carry up to three blast nozzles, the robot effectively eliminates the dangers inherent to workers perched at elevated heights while often immersed in low-visibility dust.

“Contractors seemed to like the fact it removes workers from these dangerous heights, blasts three times as fast, and also eliminates the time and costs of erecting and dismantling all the scaffolding used for these projects,” said Carr.

Weighing in at a manageable 136 lbs., the VertiDrive M3 is operated by remote control from a safe distance where the operator isn't subjected to the dust nor corresponding elevations. The robot can be fitted with three blast nozzles, thus effectively matching the productivity of three blasters, and boasts a capacity of up to 1500 ft2/hr.

The unit blasts automatically in a consistent arc pattern and is slowly advanced by the operator after each oscillation. The magnetic wheels secure the unit to the steel surface, with a single harness anchor acting as an additional safety measure. The magnets are permanent and not electro-magnetic, thus eliminating the concern of failure should power be cut. The unit can easily be carried, attached and removed from the wall by just one or two jobsite workers.

BlastOne has recently launched North American distribution of the blasting robot, after experiencing success with the unit in Australia and New Zealand. Already commissioned in projects within the United States since its release, the VertiDrive M3 promises to be a powerful option for contractors seeking both safety and productivity.

The VertiDrive's blasting arm creates a consistent arc pattern while it is advanced by its operator by remote control box.

VertiDrive's powerful magnetic wheels keep the unit fixed to the surface, requiring only a single point harness as an additional safety measure