For the 4th year, Boat Ed is the Premier Sponsor of the 2015 IBWSS meeting. Boat Ed is celebrating its 20th year in business. 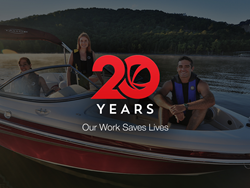 The National Safe Boating Council(NSBC) and the National Water Safety Congress (NWSC) are proud to announce Boat Ed as the premier sponsor for the 19th International Boating & Water Safety Summit (IBWSS), held March 29 to April 1, 2015, at the Grand Sandestin, in Sandestin, Fla. The IBWSS is the premier event for training, awareness, meeting and networking for anyone involved in boating and water safety in support of the National Recreational Boating Safety Strategic Plan, 2012-2016.

Boat Ed’s long-standing support of the IBWSS reflects the company’s commitment to promoting education initiatives and making recreational boating safer. Boat Ed’s support is driven by its dedication to providing print and Internet boating education courses to boaters in the United States and Canada.

“We are honored and grateful for the opportunity to partner with the IBWSS. Ultimately, we’re all in this together, and the IBWSS is a valuable time where we can all collaborate and further the recreational boating and water safety mission,” said Kurt Kalkomey, CEO of Boat Ed. “We all share a common interest of keeping the waters safer for all. The NSBC and NWSC are instrumental drivers of that mission; the impact these two organizations have is immeasurable, and we are grateful to join arms and march forward with them.”

“We are excited to have Boat Ed as the premier sponsor for the IBWSS. Their support will help further our shared interest in new boating and water safety trends and initiatives at this year’s IBWSS,” said Chris Edmonston, Chair of the NSBC.

In addition to Boat Ed’s continued support of the IBWSS, the company also is celebrating 20 years as the leading provider of boating safety education. In 1995, Kurt and Cindy Kalkomey incorporated Boat Ed® to offer boating safety education and certification tests. Since then, Boat Ed has expanded across all of North America, now educating in all 50 U.S. states and Canada.

“On behalf of the NSBC and NWSC, we congratulate Boat Ed on their 20th anniversary,” said Brian Westfall, President of the NWSC. “After two decades, they continue to play an effective role in helping state agencies, the boating public, and boating organizations like ours promote safe boating on America’s waterways.”

The 2015 IBWSS is co-hosted by the NWSC and the NSBC, and it is produced in part with a grant from the Sport Fish Restoration and Boating Trust Fund, administered by the U.S. Coast Guard. To learn more about Boat Ed’s premier sponsorship for the 2015 IBWSS, and for information on registration, exhibits, sponsorships and advertising, visit IBWSS.org.

About Boat Ed
Boat Ed® and boat-ed.com, owned by parent company Kalkomey Enterprises, Inc., is the official
provider of recreational safety education materials for all 50 U.S. states and Canada. Our print and Internet courses have been providing official safety certification since 1995. We provide safety courses in boating, hunting, bowhunting, and off-road vehicle and snowmobile operation. For more information, visit http://www.kalkomey.com.

About the National Safe Boating Council
The NSBC is the foremost coalition for the advancement and promotion of safer boating through education, outreach, and training. The NSBC accomplishes this mission by promoting outreach and research initiatives that support boating education and safety awareness, improving the professional development of boating safety educators through training, and developing and recognizing outstanding boating safety programs. To learn more about the NSBC and its programs, visit SafeBoatingCouncil.org.

About the National Water Safety Congress
The NWSC was established in 1951. The membership of the NWSC comprises agencies, organizations, manufacturers and concerned citizens who are interested in promoting recreational boating and water safety. Officers and a board of directors elected by the general membership govern the NWSC. The NWSC is dedicated to promoting water safety in the United States of America. The NWSC is committed to continuing its leadership role in advancing the promotion of education for the safety of recreational water activities throughout the United States and internationally by addressing water-related recreation accidents and drowning throughout the nation.