Libraries using any ILS can now offer seamless access to an exclusive collection of more than 10,000 digital comics, graphic novels and manga on all major mobile devices and desktop systems. 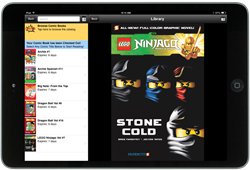 A Screenshot of Digital Comics & Graphic Novel in an App

By using cutting-edge streaming and mobile technology, our new Comics Plus service will help librarians meet the growing demand for this genre in a very cost efficient way.

Through an exclusive partnership, Recorded Books and iVerse Media will offer libraries and their patrons access to a selection of more than 10,000 digital comics, graphic novels and manga titles both inside the library and remotely.

This partnership gives Recorded Books’ international sales team the exclusive right to sell Comics Plus: Library Edition (CP:LE) to public libraries in the United States and Canada. The Comics Plus product allows libraries to make the most diverse and unique content available to their patrons. As a result of this new partnership, libraries will have the flexibility to offer these titles either in a traditional desktop environment or via a mobile application for smartphones and tablets.

“Traditionally, comic books have been a staple in the lives of many children and the recent surge in the popularity of manga and graphic novels has raised the popularity of the genre to new heights,” said Rich Freese, Recorded Books CEO. “By using cutting-edge streaming and mobile technology, our new Comics Plus service will help librarians meet the growing demand for this genre in a very cost efficient way.”

The service utilizes the new AccessILS platform to dramatically reduce the cost and time associated with developing application program interfaces (APIs) that integrate with the Comics Plus catalog. Access ILS was developed by industry-leading mobile platform-as-a-service provider Boopsie.

“Digital comics and graphic novels are among the highest circulating segments of a library’s collection, and the iVerse desktop digital catalog was already an attractive option to many libraries,” said Tony Hobdy, iVerse COO. “The deal we are announcing today is a powerful combination. iVerse’s digital catalog has what we think is the best selection of digital content, Boopsie’s AccessILS enables delivery of digital comics subscription service both faster and better, and Recorded Books’ experienced sales team is world class and knows the needs of their libraries and their patrons.”

Recorded Books will be demonstrating the new Comics Plus platform at the American Libraries Association conference in San Francisco, CA, June 26 through June 30, and invites librarians to stop by the Recorded Books booth to learn more about this fantastic new service.

About Recorded Books
Recorded Books is the largest independent publisher of unabridged audiobooks and provider of digital media to consumer, retail, professional, school, library and infotainment markets. The company owns an exclusive catalog of more than 22,000 audiobook titles narrated by professional, award-winning actors. Recorded Books provides digital audiobooks and eBooks, as well as other compelling third-party content, including digital magazines and films, through its proprietary RBdigital Gateway platform. The Company operates in the United Kingdom through its W.F. Howes subsidiary and in Australia through its Wavesound subsidiary. Recorded Books was founded in 1979 and is headquartered in Prince Frederick, MD.

About iVerse Media and Comics Plus: Library Edition
iVerse Media is a leading digital content distributor focused on the world of comics and popular culture. Founded in 2008, the company was one of the first to launch digital comics on mobile devices. With millions of iVerse-powered products downloaded, the “iVerse Engine” continues to be one of the most popular and widely used platforms for reading digital comics in the world. In 2012, iVerse expanded its digital presence by launching Comics Plus for iOS, Android and the Web. The company is principally located in Waco, TX.