Braille Skateboarding is one of the fastest growing skateboard companies in the U.S. due in part to their Viral Video approach. 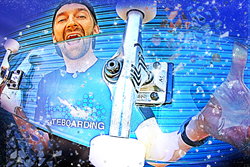 Braille skateboarding started December 8th 2005 when Aaron Kyro uploaded his very first video to a relatively unknown platform called “YouTube”. His skateboard company had cut him from their team and he had hours of footage that needed a home. For the next 10 years he uploaded skate parts and skateboarding tutorials.

After over 10 years of grinding out content Braille Skateboarding hit 500k subscribers March 30th 2015. On February 26th 2015 Gabe Cruz skated a Walmart board and this was the first spark and clue that the channel was changing from just how to videos to also include entertaining content that kept people watching longer.

Today Braille Skateboarding launched a new glass skateboard video and will keep publishing this series for the rest of 2020 as a way to say thank you to their fans for their support for the past 5 years and to pay respect to the series that helped them become one of the fastest growing skateboard companies in the world.