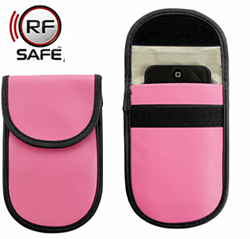 Raise donations by informing woman on a simple pink pouch that can reduce cell phone radiation which could be linked to breast cancer in young women.

Here's an idea for the next fundraiser that takes a very proactive approach to preventing breast cancer from cell phone radiation exposure - which doctors are attributing to the disease:

-Starting a breast cancer fundraising event can be a fun and fulfilling way to support a loved one battling breast cancer, raise money for further research or just increase awareness.

-Holding an event can allow special focus on planning a fundraiser and highlight a passionate fun way to rally community support and spend time with friends.

RF Safe suggests finding a a breast cancer awareness event near you and gather a team of runners and supporters for the fundraiser.

Make sure to pick an event that is scheduled far enough in advance to give enough time to raise donations by informing women on a simple pink pouch that can reduce cell phone radiation which could be linked to breast cancer in young women.

There are plenty of marathons, 5Ks and walks in numerous cities across the US that raise money for breast cancer. Most of the participants of such events will also have a cell phone carried on them during the marathon, and sport bras are becoming an ever more common place for female joggers to store their phones which is potentially putting them at a higher risk for breast cancer.

Researchers observed that all the patients developed tumors in areas of their breasts next to where they carried their cell phones. None of the patients had a family history of breast cancer, but that is not the only hazard women face when carrying a cell phone.

When a cell phone is attached to a belt or in your pocket/purse radiation can penetrate the area near the cell phone handset much deeper into your body. “Pregnant women or those wanting to start a family should consider the findings of an important Yale study.” Says John Coates, RF Safe’s Founder

These are numerous reasons that women who are pregnant or planning pregnancy should be aware of: The importance of protecting the body from cell phone radiation.