Meadow Burke is Leading the Way with Large Project Innovations

Meadow Burke, a premier manufacturer and distributor for the concrete construction industry, is leading the way in innovative construction methods for large projects with two of their products, the Burke Lockable Dowel and the Burke Double Shear Dowel. Both are being utilized to contribute to cost savings and structural integrity at the new Dallas Cowboys training complex. 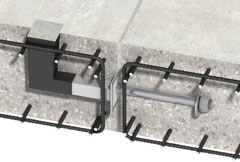 The complex, which was named “The Star”, will serve as the Dallas Cowboys headquarters and will also include a 12,000 seat arena with an indoor practice field, two outdoor practice fields, office buildings, restaurants, retail sites and a hotel. The entire project is expected to be complete by 2016. Mr. Lance Osborne, PE and New Business Development Manager at Meadow Burke commented, “The use of the Burke Lockable Dowel and Double Shear Dowel are saving both cost and time in the construction of the indoor training arena by eliminating pour strips and preventing concrete from cracking.”

Both products are being utilized worldwide to resolve issues encountered with expansion and contraction in reinforced concrete as well as post tensioned concrete structures.

The Burke Lockable Dowel helps to eliminate pour strips in typical large cast in place pours and post tension construction. With a smooth dowel in a rectangular slot, the Burke Lockable Dowel allows contraction movement in two directions while also carrying the gravity loads once the concrete has reached its designed compressive strength. The dowel is being used in slabs to provide temporary movement which allows the project team to continue normal operations. With traditional pour strips, there are safety concerns as well as material movement issues. By using the Burke Lockable Dowel, the general contractor no longer faces the safety concern of having a gap in the slab to work around. This helps to move the schedule for all trades more efficiently by allowing them to get in sooner and move more freely on the jobsite, especially when using mobile equipment such as forklifts. The Burke Lockable Dowel is the advanced solution to costly forms, added floor space, time consumption and maintenance issues.

When concrete expands and contracts based on external conditions, the concrete cracks. The Burke Double Shear Dowel is used to control the cracking by segmenting a construction joint which allows the concrete to move while controlling the direction of the movement. Manufactured from stainless steel to ensure a high degree of corrosion resistance, the Burke Double Shear Dowel requires no additional protection. It has been proven to provide durable construction and is a simple solution to many complex design issues making it a revolutionary product of its time.

Details about both products can be accessed by visiting Meadow Burke's website or calling 877-518-7665.