Oxygen Forensics announces the update of Oxygen Forensic Suite 2013, the company’s flagship mobile forensic and evidence discovery solution. The new release adds the ability to extract information from iOS devices locked with an unknown passcode, enabling acquisition of the latest iOS devices including iPhone 5, 5S, 5C, as well as all generations of iPad including iPad 2, 3, 4, Air and iPad mini with Retina display. 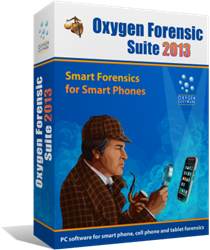 iPhone 4S, 5, and 5S as well as the new generations of iPad were remaining unbroken for much too long. We solved the problem, providing investigators the way to find an access to information stored in passcode-protected Apple smartphones and tablets.

“We did what was long considered impossible”, says Oleg Fedorov, Oxygen Forensics CEO, “Breaking protection of Apple iOS devices using last-generation hardware. iPhone 4S, 5, and 5S as well as the new generations of iPad were remaining unbroken for much too long. We finally solved the problem, providing investigators the way to find an access to information stored in passcode-protected Apple smartphones and tablets with up to date hardware”.

With the release of iPhone 4S and subsequent models, the ability to acquire data from passcode-protected devices was considerably limited. Only "jailbroken" phones or devices without a passcode (or protected with a known passcode) could be acquired. As relatively few users are "jailbreaking" their phones or use them without a passcode, the ability of investigators to perform in-house analysis of iOS devices started diminishing.

Adoption of last-generation hardware has always been strong with Apple users. With iPhone 4 being the last model that could be easily acquired, a significant number of iOS devices used today were considered unbreakable.

After acquiring information from an iOS device, experts can use the many powerful analytic features of Oxygen Forensic Suite to investigate the content of the device.

Another signature feature of Oxygen Forensic Suite allows investigators to perform a global search on all devices ever analyzed with the toolkit. The global search quickly reveals any connections (e.g. common contacts, exchanged calls, texts or emails) between the phone owners.

Oxygen Forensic Suite 2013 guarantees zero-footprint operation, leaving no traces and making no modifications to the content of the devices. This makes it the tool of choice among government and law enforcement agencies, security services, and forensic organizations in more than fifty countries.

Founded in 2000, Oxygen Forensics is the worldwide leading maker of the advanced forensic data examination tools for smartphones and other mobile devices. The company is dedicated to delivering the most universal forensic solution covering the widest range of mobile devices running Android, iOS, Blackberry, Windows Phone, Symbian and other operating systems. Law enforcement and government agencies, institutions, corporations and private investigators, help desk personnel and thousands of private consumers rely on Oxygen Forensics products to ensure evidence availability in the event of mobile device data analysis and recovery. Oxygen Forensics customers include various US and European federal and state agencies such as the IRS, US Army, US Department of Defense (DOD), US Department of Justice, US Department of Homeland Security, US Department of Transportation, US Postal Service, US Supreme Court, European Commission, London Metropolitan Police, French National Police and Gendarmerie, PricewaterhouseCoopers, Ernst & Young, and many others. As a result, Oxygen Forensic Suite receives great response at forensic conferences, exhibitions and trainings, and occupies a spot on the top of the list in relevant tests for extracting more data than competitors.

More information about Oxygen Forensics and its forensic solutions is available at http://www.oxygen-forensic.com