City of Calgary council adopted an $87 billion dollar “Pathways to Poverty” NetZero climate plan which Friends of Science Society says has no scientific basis nor practical foundation for implementation. Climate emergency declarations are based on misuse of scenarios, as explained in “Facts vs Fortune Telling”, a Friends of Science report rebutting Dr. Katharine Hayhoe's "Alberta's Climate Future." 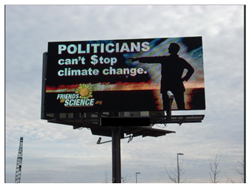 From the Friends of Science Society’s “Pathways to Poverty” rebuke: “Among the reasons given for the Declaration is a statement that Calgary and Alberta suffered six out the ten costliest Canadian natural disasters on record, with no details provided. If this refers to wildfire damages (e.g., Slave Lake in 2011 [arson ] and Fort McMurray in 2016) the reasons for the massive damage were poor forest management and insufficient setback between buildings and the edges of the forests. The Calgary flood of 2013 was a weather event…Calgary’s downtown is built on a floodplain, so floods are a constant hazard.”

The province of Alberta and numerous cities consulted with Dr. Katharine Hayhoe to forecast “Alberta’s Climate Future” using Hayhoe’s discredited method of “downscaling” Global Circulation Models to a region. Friends of Science Society’s evidence-based rebuttal “Facts vs. Fortune Telling” shows that eight of the worst floods in Calgary’s history were before 1933, two of them with higher flows than that of the 2013 flood.

Climate emergency stems from the misuse of a catastrophic but implausible scenario known as “RCP 8.5.” A peer-reviewed paper by Roger Pielke, Jr. and Justin Ritchie published in Elsevier’s Energy Research and Social Sciences explains the damage done by this misuse.

As shown by long-time climate policy analyst Roger Pielke, Jr., in the IPCC UN climate panel’s Physical Sciences report, the frequently cited extreme “RCP 8.5” climate scenario is no longer seen as our likely future. Thus, the perceived climate emergency is over. We do have time, says Friends of Science.

The Calgary Climate Hub, a project of Al Gore’s Climate Reality, was influential on council’s decision-making. Gore has been a vocal cheerleader of the Tar Sands Campaign to block Canadian pipeline and energy projects, which has gutted the energy city of Calgary. The Vipond family, associated with the Calgary Climate Hub, is sometimes referred to by Twitterati as the “Thunbergs of Canada”. Dr. Vipond and his young daughter Sadie attended COP26 as reported by CBC Oct. 30, 2021. Sadie Vipond is suing the government of Canada over climate change policy, as reported by CBC on Sept. 29, 2020. Dr. Vipond was influential in the Alberta NDP-New Democratic Party's early coal phase-out campaign of 2015 which cost the province over $22 billion in compensation to coal companies. This is largely responsible for the tripling of the Alberta electricity pool power prices today.

A 2018 Friends of Science Society report entitled “In the Dark on Renewables,” critiqued the inept power generation claims of Climate Reality and Deloitte Insights about renewables. “The True Cost of Wind and Solar for Alberta” and “What You Really Need to Know about Renewables (That the Pembina Institute Won’t Tell You)” paint a broader picture of the colossal error of Calgary City Council in approving the “Pathways to Poverty” says Friends of Science.

Friends of Science points out that on top of the cost of Calgary’s $87 billion climate plan, taxpayers will also be underwriting the costs of Ottawa’s $60 billion climate plan through federal taxes. As Peter Drucker foretold in “Unseen Revolution,” pension fund socialism has taken over – under the guise of saving the planet.