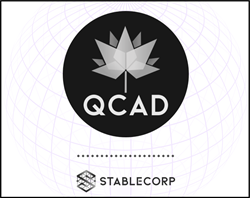 Canada Stablecorp Inc. is a joint venture between 3iQ, Canada’s largest cryptoasset manager and Mavennet Systems, a leader in blockchain development. QCAD is Stablecorp’s first product release, and is a digital asset with the stability of the Canadian dollar. It is built on the Ethereum blockchain by utilizing the ERC-20 standard and enjoys the full benefits of enabling seamless settlement and full traceability. Stablecorp plans to extend the asset to other networks in the future.

QCAD is the first Canadian dollar stablecoin designed for the mass market. According to Jean Desgagne, CEO of Canada Stablecorp “We are excited to be creating an important piece of financial market infrastructure for Canada that will serve the digitization of capital markets and provide a robust payment and settlement solution. QCAD represents a significant opportunity to set a new standard of transparency and auditability in digital currencies and will help drive trust and mass adoption of stablecoins.”

The digital asset landscape is traditionally characterized by highly volatile price points even for the most prominent assets such as Bitcoin and Ether. Stablecoins provide the advantages of blockchain-based digital assets, while providing an anchored price point. Stablecoins are a critical link between legacy financial infrastructure and the digital native world. Throughout the past year, stablecoins have become the fastest growing digital asset class, expanding from USD $2.4 Billion in Oct 2018 to over $4.94 Billion in November 2019.

Kesem Frank, President of Mavennet Systems, stated, “QCAD is a significant stepping stone for the Canadian financial market, establishing an imperative link to the world of digital assets.”

For 3iQ, this launch comes on the heels of a recent approval of the Bitcoin Fund with the Ontario Securities Commission. According to Fred Pye, President and CEO of 3iQ Corp, this is the next logical step for capital markets in Canada. “We believe the future of equity and bond trading in this country will move towards digital rails. QCAD is in a position to act as the settlement mechanism for these next generation solutions.”

“The DV team is excited to announce our partnership with Stablecorp, where DV Chain and DVeX will act as an authorized dealer for their newly launched Canadian dollar stablecoin. QCAD is Canada's first fully complaint stablecoin with a 1/1 CAD equivalency, which will enable DV’s clients to trade and settle in a CAD-equivalent token; providing a faster and safer crypto on/off ramp, along with a seamless and near instant delivery process”

“Netcoins is absolutely thrilled to be part of this historic moment in Canadian finance. The ability to send and receive Canadian Dollars around the world instantly via QCAD, with almost zero fees, or limits, is an absolute game-changer. Netcoins main goal is to help Canadians learn about and access digital currencies, and partnering with Stablecorp on the QCAD launch aligns perfectly with this goal”

“Bitvo is excited to be a part of the team bringing QCAD to digital asset traders, both retail and institutional. With the launch of QCAD, the Stablecorp team is filling a gap in the market that Bitvo customers have been searching for and requesting for some time”

"Stablecoins are proving to be a very important evolution in the digital asset industry, and QCAD is far and away the most reputable project in Canada. QCAD will allow us to streamline payments and will unlock a whole new set of capabilities for Newton customers."

"Given QCAD's aim and focus, it only made sense to have a Canadian custodian offer support from day one. We're extremely excited to be that custodian and to be working closely with Stablecorp in enabling the local ecosystem to grow."

“At Bidali, we believe the future of money is stable, secure and interoperable digital currency that is built on the foundations that cryptocurrencies such as Bitcoin pioneered. Our payments platform already supports a plethora of these next generation digital currencies denominated in USD so it’s incredibly exciting to be able to add the Canadian Dollar denominated QCAD to the platform. We’re excited to play a role in enabling people to transact more efficiently and, as the ecosystem matures, digital currencies like QCAD will enable more frictionless FX conversions and the ability to truly have real-time settlements in Canada."

“As the landscape for Canadian crypto currency continues to expand from market testers, to active traders and to institutional players, there is an immense need for a Canadian stable coin. As Tether has become the most actively traded of all cryptocurrencies, having a Canadian equivalent will be a game changer for the Canadian crypto ecosystem. It will provide much needed flexibility as investors will finally be able park their funds in a stablecoin while coming in and out of trades. We could not be more excited to partner with the QCAD team to bring this idea to the market. Finally, a team and project that we at CoinSmart feel confident getting behind.”

The QCAD stablecoin gives Canadian businesses a faster, cheaper, more transparent way to transact globally. Gilded will enable enterprise adoption of QCAD through integrated payments and accounting solutions. Today, you can send an invoice in CAD and give customers the ability to pay in QCAD. Now, Canadian companies can #OptIntoOpenFinance.