Actress, musician, and style icon to be presented with The Hero Award at the organization’s star-studded gala on June 17 in New York. 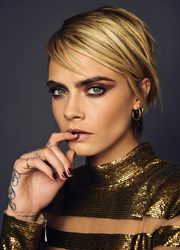 Today, The Trevor Project announced that actress, musician, and style icon Cara Delevingne will be honored at the organization’s TrevorLIVE New York gala with the Hero Award for her commitment to supporting The Trevor Project’s mission to end suicide among LGBTQ (Lesbian, Gay, Bisexual, Transgender, Queer, and Questioning) young people. TrevorLIVE New York, the organization’s annual star-studded signature fundraiser, will be held on Monday, June 17 at Cipriani Wall Street in New York City.

“I’m humbled and truly speechless by The Trevor Project’s decision to honor me with this year’s Hero Award,” said Cara Delevingne, TrevorLIVE New York’s 2019 Hero Award recipient. “A ‘hero’ to me is someone who stands up for what they believe in. They help to make change for those who are underserved or discriminated against. I strive to acknowledge those who feel like they don’t fit into a box and make sure they know, in both good and bad times, that there is always someone there to support them. I’m inspired and motivated by The Trevor Project’s tireless, life-saving work to support LGBTQ youth in crisis, and I’m extremely proud to be a part of such a resilient community.”

“The Trevor Project hears from young LGBTQ people every day who draw hope and inspiration from their idols — especially when those idols openly share their personal experiences and messages of support like Cara — because it reminds LGBTQ youth that they are not alone,” said Amit Paley, CEO and Executive Director of The Trevor Project. “We’re grateful to Cara for using her voice to inspire so many young people in the LGBTQ community, and we’re excited to honor her with this year’s Hero Award in celebration of her positive impact and passion.”

In addition to being outspoken about LGBTQ rights, Cara Delevingne often uses her platform to speak out about issues on mental health, women’s rights and animal conservation. Outside of advocacy, she has continued to make her mark on the big screen since her film debut in Joe Wright’s Anna Karenina in 2012. She’s since starred in Luc Besson’s Valerian and the City of a Thousand Planets, DC Comics’ Suicide Squad, Chris Foggin’s Kids in Love, Joe Wright’s Pan, Jake Schrier’s Paper Towns based on the book by John Green, Michael Winterbottom’s The Face of an Angel, and Matthew Cullen’s London Fields. Delevingne’s upcoming projects include Alex Ross Perry’s Her Smell and Mitja Okorn’s Life in a Year. This fall, Delevingne will make her small screen debut in Amazon’s highly-anticipated fantasy drama Carnival Row. The eight-episode series will feature Delevingne opposite Orlando Bloom. Delevingne has a large passion for music and is a talented singer and drummer. Her Pharrell Williams produced song “I Feel Everything” was featured on the Valerian and the City of a Thousand Planets soundtrack. Delevingne is currently the face of Dior Skincare, Puma Activewear, Burberry Fragrance, Rimmel London Cosmetics, and TAG Heuer Watches. With over 41 million followers on Instagram and over 10 million on Twitter, Cara continues to be an influential voice on social media.

Proud presenting sponsors of this year’s TrevorLIVE NY include Macy's and McKinsey & Company. In addition, Kimpton Hotels & Restaurants will serve as the official hotel partner, and United Airlines as the official airline sponsor.

Additional names, including the host and performers for TrevorLIVE New York, will be announced in the coming weeks. For more information on TrevorLIVE NY, please visit https://ny.trevorlive.org

About The Trevor Project
The Trevor Project is the world's largest suicide prevention and crisis intervention organization for lesbian, gay, bisexual, transgender, queer & questioning (LGBTQ) young people. The Trevor Project offers a suite of 24/7/365 crisis intervention and suicide prevention programs, including TrevorLifeline, TrevorText, and TrevorChat as well as the world’s largest safe space social networking site for LGBTQ youth, TrevorSpace. Trevor also offers an education program with resources for youth-serving adults and organizations, a legislative advocacy department fighting for pro-LGBTQ legislation and against anti-LGBTQ rhetoric/policy positions, and conducts research to discover the most effective means to help young LGBTQ people in crisis and end suicide. If you or someone you know is feeling hopeless or suicidal, our trained crisis counselors are available 24/7/365 at 1-866-488-7386 and TheTrevorProject.org/Help.

TrevorLIVE is the signature annual fundraising event of The Trevor Project. This annual event brings together top entertainers and corporate leaders to support the organization’s life-saving initiatives. Learn more about TrevorLIVE at http://ny.trevorlive.org