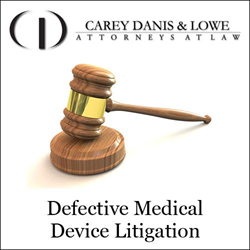 Carey Danis & Lowe comments on the fact that the Johnson & Johnson subsidiary, Ethicon, settled the third transvaginal mesh bellwether case to go to trial only a few days after the trial's beginning. The trial started on Monday, March 2, 2015, and by the end of the week, Ethicon arrived at a settlement with the plaintiff, Dianne Bellew.

When the jury arrived at the federal court in Charleston, West Virginia on Friday, March 6, they were relieved of their duty, an event documented in a court document relating to the Bellew trial.

The trial took place at the U.S. District Court for the Southern District of West Virginia in Charleston. The Ethicon multidistrict litigation (MDL) is In re: Ethicon, Inc., Pelvic Repair System Products Liability Litigation MDL No. 2327.

According to a report from Reuters on the Bellew trial, an Ethicon spokesperson confirmed the settling of the case. However, the spokesperson did not share additional details on the agreement.¹

Carey Danis & Lowe, a national law firm that currently represents women who claim injury from transvaginal mesh products, is encouraged by the fact that both parties reached a settlement before the trial could even reach a conclusion by jury verdict. The team of defective medical device lawyers at Carey Danis & Lowe say that efficiency is key in an MDL, and the swift resolution of the Bellew case maintains this key element.

The swift resolution of the Bellew case also meets the request of the federal judge managing the Ethicon MDL, say Carey Danis & Lowe attorneys. U.S. District Judge Joseph R. Goodwin was quoted in a February 2015 report from Reuters as saying that he was “going to kick it into high gear”, and requested the same of defendants and plaintiffs in the 7 transvaginal mesh MDLs under his management.²

Contact Carey Danis & Lowe by phone at 800.721.2519 for information on the law firm's free case evaluations and legal services.