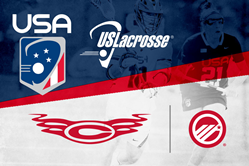 “Our new and expanded relationship with Cascade Maverik provides US Lacrosse and our National Teams Program with a valuable partnership with an industry leader that provides best-in-class equipment to our athletes."

Cascade Maverik Lacrosse has signed a new multi-year partnership agreement with US Lacrosse, the U.S. men’s and women’s national teams and the National Team Development Program (NTDP). Cascade, a longtime partner of the U.S. national team program, also becomes the “Preferred Helmet Partner” of the US Lacrosse First Stick Program and brings the Maverik brand into the US Lacrosse family.

“Our new and expanded relationship with Cascade Maverik provides US Lacrosse and our National Teams Program with a valuable partnership with an industry leader that provides best-in-class equipment to our athletes,” said Tom Pope, Director of Corporate Partnerships for US Lacrosse. “We are especially excited to see them embrace our NTDP, which launched last year. This puts Cascade Maverik in the unique position of connecting with our players as they enter the national team pipeline and seeing them through the pinnacle of representing the USA in world championship competition.”

“We are extremely grateful for the opportunity to support US Lacrosse, the growth of the sport, and players nationwide. Both the Cascade and Maverik brands embrace a unifying mission to improve the player and advance the game so our partnership with US Lacrosse is a natural fit,” said Patrick O’Toole, Director of Marketing for Cascade Maverik Lacrosse. “Providing game-elevating equipment to our country’s most elite, and inspiring participation among all ages alongside US Lacrosse brings us great joy and we’re proud to be a part of it.”

US Lacrosse oversees all aspects of the U.S. National Team Program and the NTDP. Since 1967, the U.S. men’s and women’s teams have combined to win a record 31 world championships. In 2019, more than 200 of the sport’s top athletes represented the U.S. in competition, exhibitions and tryouts.

The NTDP formally launched in 2019 with more than 1,000 athletes participating in tryouts held in conjunction with the Premier Lacrosse League and the Women’s Professional Lacrosse League. From that group, nearly 300 competed in a national combine at US Lacrosse headquarters and 88 were chosen to represent the country as part of the USA Select teams that competed against international competition at the Fall Classic.

The US Lacrosse First Stick Program dates to 2010 and generous funding from donors and partners has helped build the program into a cornerstone initiative that seeks to expand participation in the sport beyond traditional boundaries. Over the last five years, US Lacrosse has awarded more than $6 million in equipment to deserving programs and more than 5,000 players are assisted on an annual basis.

ABOUT CASCADE MAVERIK LACROSSE, LLC
Based in Liverpool, NY., Cascade Maverik is comprised of two brands, Maverik and Cascade. Cascade's "passion to protect" has helped it become the #1 manufacturer of lacrosse head and eye protection for male and female athletes at all levels of the sport. Since 1986, Cascade prides itself on building and delivering high performance game-changing headgear, manufactured in the USA. Maverik, founded in 2005 by All-World professional lacrosse players, is a leading lacrosse manufacturer of heads, shafts, complete sticks, a complete line of protective gear, and accessories. For more information, please visit http://www.cascadelacrosse.com or http://www.MaverikLacrosse.com

ABOUT US LACROSSE
US Lacrosse, a 501(c)(3) nonprofit corporation, is the national governing body of men’s and women’s lacrosse and the home of the nation’s fastest-growing team sport. US Lacrosse, which coordinates all activities of the U.S. National Teams Program, has nearly 450,000 members across the country. Through responsive and effective leadership, US Lacrosse provides programs and services to inspire participation while protecting the integrity of the sport. For more information, please visit https://www.uslacrosse.org/