Many celebrities came out to golf for the Chris Elliott Fund at their 12th Annual Celebrity Golf Tournament at Bear Creek Country Club. 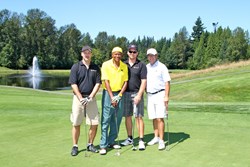 Slick Watts and his team at 12th Annual Tournament

The event was complete with putting contest, longest drive and closest to the pin competitions for both men and women as well as prizes for the top 2 best scoring teams. Foursomes had the opportunity to golf with celebrity golfers.

About the Chris Elliott Fund:
The Chris Elliott Fund (CEF) is a brain cancer and brain tumor patient advocacy organization and national 501(c)(3) non-profit with corporate offices in Seattle, Washington. Established in 2002, Chris Elliott Fund’s mission is to end brain cancer by expanding patient access to specialists, advanced treatments and comprehensive support programs. The organization and its advocates directly serves 400+ patients and caregivers every month free of charge. CEF is a member of the Society for Neuro-oncologists, American Association of Neuroscience Nurses, American Cancer Association for Cancer Research, Washington Biosciences Association, among others. If we can help, please contact us at WeCare(at)EndBrainCancer(dot)com.