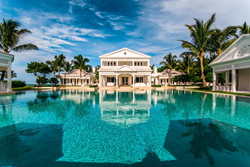 According to the real estate website TopTenRealEstateDeals.com, Celine Dion has reduced the asking price on her Florida mansion and water park to $45.5 million.

Grammy Award-winning Canadian singer Celine Dion and her manager husband, René Angélil, built their Florida dream vacation home on Jupiter Island in 2010. The location offered the privacy the hard working couple wanted to relax with their children and friends and they designed an estate around a series of water features and outdoor sports activities that took full advantage of the Florida sunshine and Atlantic Ocean breezes. But even for celebrities who seem to have achieved it all, life can throw curve balls.

Though René had successfully fully recovered from a bout of throat cancer in 1999, it reoccurred in 2013, when he had surgery for another malignant throat tumor. Celine announced in 2014 that she would suspend her performances indefinitely due to her husband’s worsening health. In August of 2015, she resumed her Las Vegas residency at Caesar’s Palace, but lost René to cancer in January 2016 and her brother only two days later. The couple and their three children had made the Las Vegas bedroom community of Henderson their home while Dion was performing at Caesar’s Palace. She returned to the stage on February 23rd for the first time since René’s death and paid tribute to his memory and their life together in her first performance.

Their Bahamian-inspired Florida oceanfront estate was first put up for sale in 2013, the year that René was re-diagnosed, for $72.5 million. Over a period of time with no buyer interest, the price was cut to $62.5 million. The price was recently reduced to $45.5 million.

Among many five-star features, the 5.5-acre beachfront property’s #1 centerpiece is the 500,000 gallon water park highlighted by a slow-current lazy river connecting two pools, bridges and a twisting water slide. There is also another pool located beachside. The two-story, 10,000-square-foot main residence has five bedrooms with a second-level wraparound terrace with ocean views and multiple main-level terraces. The luxurious master suite walk-in closet has automated carousels for quick access to shoes and clothing at the touch of a finger. The open-plan main level is light and airy in keeping with the subtropical climate. There are also two separate four-bedroom guest houses, tennis house, simulated golf range, pool house and beach house. Celine’s Jupiter neighbors include Michael Jordan and Tiger Woods and Palm Beach is just a few miles down the road.

Now settled in Nevada at least until the end of her Caesar’s Palace residency in 2019, Celine has stepped up her effort to sell her Florida private resort estate by engaging a new brokerage and lowering the asking price. Fenton Lang Bruner & Associates in Jupiter Island currently holds the listing.