RF Safe is joined by a growing number of respected doctors and scientists in speaking out to correct recent comments made by Dr.Siddhartha Mukherjee claiming cell phones do not cause cancer. 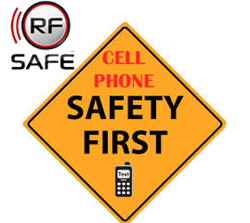 Be RF Safe To Be Sure! Cell Phone Radiation Safety First

RF Safe applauds the efforts of Dr. Dariusz Leszczynski and Dr. Devra Lee Davis who have spoken out in an almost instant response to correct medical opinions that put the public's health at risk.

RF SAFE, the world's premier provider of cell phone radiation protection accessories and informational data is concerned the public maybe confused by comments made by Pulitzer Prize winning cancer doctor, and author of the best selling book, 'The Emperor of All Maladies: A Biography of Cancer', Dr.Siddhartha Mukherjee made at a recent lecture in India.

Daily News and Analysis (DNA), the Indian news site published in English from Mumbai, reports thoroughly on the opposing views of medical professionals in a story published 4/24/2014 titled, 'Experts slam Dr Siddhartha Mukherjee's comments on no link between cell phones and cancer" http://www.dnaindia.com/mumbai/report-experts-slam-dr-siddhartha-mukherjee-s-comments-on-no-link-between-cell-phones-and-cancer-1981379

The remarks were made when Dr.Siddhartha Mukherjee was a speaker for an event hosted by the Cellphone Operators Association of India (COAI) in New Delhi on April 21.

"Mukherjee, in the COAI-sponsored talk on April 21, said that WHO (World Health Organization) should remove cell phone radiation from its list of possible carcinogens." says Maitri Porecha, a Journalist for DNA India.

Dr. Devra Lee Davis, M.P.H., Ph.D, speaks out confidently to protect the public, and goes on record to correct comments made by Dr.Siddhartha Mukherjee. Pulitzer Prize winner or not, Dr. Davis has the credibility and respect to quickly put an end the frivolous remarks.

"Mukherjee has no training or expertise in bioelectromagnetics or epidemiology. And his call for the World Health Organisation (WHO) to take the unprecedented step of delisting something that experts unanimously with one exception voted was a possible human carcinogen has clearly been sponsored by the telecom industry, which also sponsored his trip to India to give these talks," said Davis, as reported by DNA India

Dariusz Leszczynski, PhD, a well respected member of the 30 person panel that enacted the official global warnings of cell phone radiation being a possible human carcinogen — quickly reacted to this latest wireless industry propaganda by defending the panels decision which ended in a vote of 27 experts out of 30 voting for cellphone radiation being classified as a possible human carcinogen.

Dr. Leszczynski’s full response can be read from his blog post 4/22/2014 titled, “Is telecom industry so desperate that it calls for a desperate measures?” http://betweenrockandhardplace.wordpress.com/2014/04/22/is-telecom-industry-so-desperate-that-it-calls-for-a-desperate-measures/

RF Safe applauds the efforts of Dr. Dariusz Leszczynski and Dr. Devra Lee Davis who have spoken out in an almost instant response to correct medical opinions that put the public's health at risk.

Since 1998 RF (Radio Frequency) Safe has been dedicated to evolving the wireless industries safety standards, by engaging in the business of design, testing, manufacture, and sale of safety technologies to mitigate harmful effects of cell phone radiation.