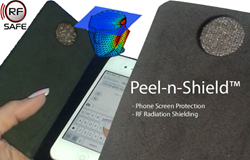 Peel n Shield™ is RF Safe’s newest innovation that allows consumers to make effective cell phone radiation shields in minutes with only a pair of scissors.

Most materials are transparent to microwave radiation from cell phones and the energy is absorbed into a users body closest to where the cell phone is being carried or stored.

This radiant energy is absorbed much faster than at the head because tissues and organs such as liver, kidneys and reproductive organs provide much better conductivity than the skull. Simply put most of the body's major organs have no bone protection like the brain does.

The basic requirement of any RF radiation shielding is that it is electrically conductive. An example of RF Safe EMI shielding fabric is Silver plated-metalized woven nylon used in many of RF Safe's shielding products.

“Peel n Shield™ is the solution to giving cell phone users the radiation protection they need when carrying a wireless device in close proximity to the body for extended periods of time,” said Coates.

RF Safe’s new Peel n Shield™ technology makes it possible to permanently shield most cell phone cases that have a magnetic latch flip cover. Shielding a flip cover case is one of the most recommended ways to keep an RF shield between a cell phone and user.

As long as Peel n Shield™ is between a users body and device, no matter if the phone is in a pocket, purse or talking with it to the ear - Peel n Shield™ provides a barrier “as large or larger” than the cell phone between the body and potentially dangerous microwave radiation when using an RF Safe shielded flip cover case with Peel n Shield™.

The company's Founder, John Coates said "RF Safe's flip cover cases only incorporate shielding mechanisms which utilize reflection, as absorption (attenuation) is never used to prevent affecting the phones software regulating RF power out-put. It's only acceptable to use absorption technologies on wires (Ferrite Beads), such as on a headset plugged into a cellphone, but never on the cell phone itself."

"RF Safe's technical and sales staff looks forward to helping concerned cell phone users in any way that we can - RF Safe's 16 yrs of experience in the safest ways to reduce cellphone radiation exposure is only a click or call away," says Coates

Peel n Shield ™ is a Trademark of RF Safe Corporation