New Center of Scientology Opens in the North of Israel

Hundreds of guests and dignitaries convened in the city of Carmiel to celebrate the opening of the new Scientology Center for the North of Israel. The Center will provide Scientology Life Improvement courses and spiritual counseling and will serve as a hub for the many social betterment and humanitarian programs Scientology supports. 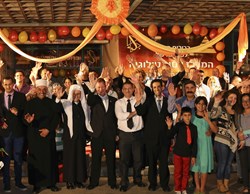 Hundreds of guests and dignitaries convened in the city of Carmiel November 9, 2013, to celebrate the opening of the new Scientology Center for the north of Israel.

This center is a landmark and a symbol of hope and a better future for Carmiel and the entire region. Scientology is first and foremost knowledge—true and practical knowledge of life itself. This knowledge is for everyone.

Leaders of the Druze and Scientology religions joined in the dedication November 9 of the Scientology Center for the north of Israel in the city of Carmiel.

The honorable Sheikh Hussein Laviv Abu-Rukun, Chairman of the Druze Trustees and founder of the Association for the Preservation of the Druze Heritage, spoke about how he learned of Scientology and why he initiated the first joint activity between the Druze and the Scientology communities in Israel. In his travels around the world to learn about different religions, philosophies and faiths, he became fascinated by the Scientology movement, its members, and its Founder, philosopher and humanitarian L. Ron Hubbard. He saw a striking resemblance between the Druze and Scientology communities and philosophies.

Sheikh Abu-Rukun spoke of the long and honorable history of the Druze people in the Middle East and the moral code they embrace—one of courage, integrity, honesty and a sense of duty that encourages them to support the improvement of the countries where they dwell.

“Since my first encounter with believers in the teachings of L. Ron Hubbard, I have continued to meet enthusiastic and charming Scientologists who are adamant about their mission to right wrongs wherever they exist and who organize and drive forward activities to uplift humanity in communities across the five continents,” he said. “I have been tapping into this wisdom ever since, and promoting this wisdom in my world in Israel and abroad—a wisdom of purity that does not overlook any of the barriers that prevent the progress of humankind or their love for one another. L. Ron Hubbard and his followers do everything they can to demonstrate and instill the truth that all men are created free and equal—a resounding and significant truth for the Druze, who aspire to be regarded as equal to all in all respects.”

Mr. Muhammad Abuelheja, National Coordinator for the Volunteers of the Hano'ar Ha'oved Ve'halomed youth movement, has spearheaded the Scientology-sponsored Truth About Drugs initiative in the city of Tamra. He spoke of the value of the program and how Scientology bridges differences and unites people from all walks of life.

“On behalf of myself, the youth of the Arabic community in general, and the youth in the city of Tamra in particular, I would like to congratulate the residents of the north of Israel for the opening of this new center of Scientology in Carmiel,” he said. “We are here—Jews and Arabs from across the country, from rural and urban Israel alike—to celebrate this event. We have many differences among us, but the higher purpose of all humanity is a better society, a society without criminality, a society whose members are free to rise to greater heights, and it is this purpose that unites us here.

“There are many programs that fight drug abuse, but the difference with our activity is the tools themselves and the spirit of volunteering. Come and learn from the Scientologists how to change society. Drug abuse in Tamra decreased by 70 percent since 2008 when we began our Truth About Drugs program in the city. I want to thank you from the bottom of my heart for this important activity. Thanks to you, our mutual activity has now spread through the entire city and is helping us accomplish our purpose—a good society, a brave society, one that is caring and true to its members.”

Mr. Shlomi Leibovitch, Executive Director of the Center of Scientology Israel, congratulated the leaders of the new center and wished them and all residents of the region success with the application of the tools now available to them locally.

“This center is a landmark and a symbol of hope and a better future for Carmiel and the entire region,” he said. “Scientology is first and foremost knowledge—true and practical knowledge of life itself. This knowledge is for everyone. L. Ron Hubbard believed that no one has a monopoly on knowledge or wisdom—it is meant for any person who reaches for it. This center is here to serve all of you and the people of the North. Scientology believes in Man wherever he is and the principles of Scientology teach that every person deserves an equal chance to understand, to progress, and succeed in life.”

The Scientology movement has been active in Israel for more than 40 years. The Center of Scientology Israel was dedicated August 21, 2012. Its new home, the famed Alhambra Theater, is configured to service Scientologists in their ascent to spiritual freedom and to serve as a home for the entire community—a meeting ground of cooperative effort to uplift citizens of all denominations.