Hundreds of thousands of students worldwide set to compete in Microsoft Word, Excel, and PowerPoint. 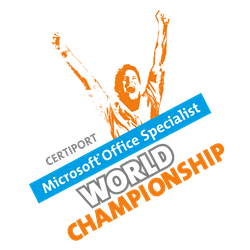 The 2020 Microsoft Office Specialist World Championship has been launched by Certiport, the leading provider of performance-based IT certification exams that accelerate academic and career opportunities for learners.

In its 19th year, the competition is expected to attract more than 800,000 candidates from more than 100 countries. Students enter to prove their superior skills in Microsoft Word, Excel, and PowerPoint, culminating the most popular technology skills competition on Microsoft Office and the only one endorsed by Microsoft since its inception in 2002.

To enter the competition, students age 13 to 22 must pass a qualifying Microsoft Office Specialist (MOS) certification exam to demonstrate their mastery of either Microsoft Office 2016 or Office 365. Regional competitions will be held worldwide, and finalists will compete in the championship round of the competition at Disney’s Grand Californian hotel in Anaheim, CA from August 2-5, 2020.

“Every year the Microsoft Office Specialist World Championship grows as more students realize the value of earning industry certification to validate their Microsoft Office skills,” said Ray Murray, Vice President and General Manager – IT, Pearson VUE. “We love hosting the competition because it promotes workforce ready skills and it is a great time for everyone involved. We look forward to another fantastic year of competition leading up to crowning our World Champions.”

In the concluding round, competitors participate in unique, project-based, real-world tests to demonstrate their ability to create documents, spreadsheets, and presentations in Word, Excel, and PowerPoint. Certiport will recognize the top student competitors with cash and prizes; $7,000 for first place, $3,500 for second place, and $1,500 for third place.

“We’ve supported the Microsoft Office Specialist World Championship since its inception because we see how it inspires individuals to perfect their Office skills,” said Anthony Salcito, Microsoft Vice President, Worldwide Education. “Whether they win or not, they all earn a valuable industry credential recognized by employers worldwide as a validation of skills they can use in almost any line of work.”

The 2019 MOS World Championship was a great success with 850,000 competitors from 119 countries. Watch the MOSWC news round-up video to relive the excitement.

Certiport is the leading provider of learning curriculum, practice tests, and performance-based IT certification exams that accelerate academic and career opportunities for learners. Certiport provides certification development, delivery, and program management services through an expansive network of more than 12,000 Certiport Authorized Testing Centers worldwide. More than 3 million Certiport exams are delivered in 26 languages across 148 countries each year throughout the academic, workforce, and corporate technology markets. Certiport is a Pearson VUE business, and is a part of the world’s leading learning company, Pearson. To learn more, go to http://www.certiport.com.