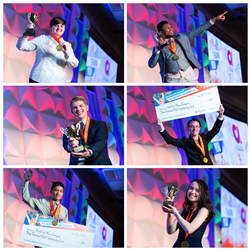 Even more inspiring than watching these MOS U.S. National Champions go on to compete at the World Championship is to see what they do beyond the competition in college and career.

Certiport, a Pearson VUE business and the leading provider of performance-based IT certification exams that accelerate academic and career opportunities for learners, today announced the winners of the 2019 Microsoft Office Specialist (MOS) U.S. National Championship. The champions topped 146 finalists at the event in Orlando, Florida, and the first-place winners will now head to New York City, NY for the MOS World Championship from July 28-31.

The MOS U.S. National Champions are as follows:

“Every year we look forward to recognizing these students who have worked so hard to master Microsoft Word, Excel and PowerPoint,” said Ray Murray, Vice President and General Manager – IT, Pearson VUE. “They may be young, but they are mastering the skills that employers need in the workplace. Even more inspiring than watching these MOS U.S. National Champions go on to compete at the World Championship is to see what they do beyond the competition in college and career.”

Finalists were given a printed copy of a document, spreadsheet or presentation to recreate along with printed instructions and digital assets. They were then scored according to the accuracy of the recreation compared to the original. The champions in each program, along with a chaperone, have won a trip to participate in the 2019 MOS World Championship in New York City, NY where they will compete with more than 150 other finalists from 40 countries.

"We are proud to support the MOS program and see the powerful impact it has on young lives – not just the champions, but everyone who earns certification,” said Anthony Salcito, Vice President, Education at Microsoft. “We support both the MOS U.S. National and World Championship events and are always impressed with the caliber of participants. These students have proven they can use Microsoft Office tools effectively, which will serve them well both in further academic pursuits and in any career.”

Certiport is the leading provider of learning curriculum, practice tests and performance-based IT certification exams that accelerate academic and career opportunities for learners. Certiport provides certification development, delivery and program management services through an expansive network of more than 12,000 Certiport Authorized Testing Centers worldwide. More than 3 million Certiport exams are delivered in 26 languages across 148 countries each year throughout the academic, workforce and corporate technology markets. Certiport is a Pearson VUE business, and is a part of the world’s leading learning company, Pearson. To learn more, go to http://www.certiport.com.