From Humiliation to Victory, Local Businessman Explains His Journey in New Biography Video: “Persistence: Characteristics of a Successful Entrepreneur” 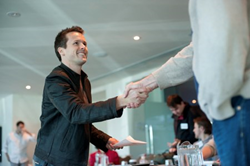 I like putting everything out on the table so others can learn; which is why in this video, you will see everything - warts and all. And by the end of it, you’ll know that success is about one key thing: persistence.

On 10 September 2014, local Melbourne man David Jenyns launched a personally revealing biography video explaining what it took for him to triumph in business. As the owner of a boutique online marketing company, Melbourne SEO Services, Jenyns exposes the weaknesses he had to overcome to finally achieve success. He explains, “I like putting everything out on the table so others can learn; which is why in this video, you will see everything - warts and all. And by the end of it, you’ll know that success is about one key thing: persistence.”

According to the Australian Bureau of Statistics report a year ago, an average of 44 small businesses close their doors each day. Although this disquieting fact is public knowledge, people still start businesses with the hopes they’ll be one of the few who obtain financial success.

One of the few who are still bucking this statistical trend is David Jenyns whose list of business accomplishments range from share trading, retail business, online marketing, video production and public speaking. “As I progressed through the stages of entrepreneurship, I recognized that with each step, more and more people were coming to me for help. I find it very easy to assist others, which is one of the reasons I’m so proud of this video” says Jenyns.

The biography style video entitled “Persistence: Characteristics of a Successful Entrepreneur” was recently launched on the Melbourne SEO & Video YouTube channel. The opening scene is of a young David Jenyns, feeling degraded in front of his peers after being physically sick from the strain of a martial arts match.

“There's nothing more humiliating. And there I was on my first day with everyone watching. On my hands and knees, mopping up my own vomit” meekly explains the entrepreneur to his interviewer Tim Reid, who’s listening with a look of understanding and care.

In the video, Jenyns continues, “The next week, I came back - and you know what my teacher said? ‘I didn't expect to see you here again’” at which the word ‘Persistence’ appears on screen, a trait that Jenyns is about to show throughout the rest of the video with his life experiences.

The video was elegantly directed by Tropfest finalist Adrian Cabrie, who is also the lead videographer for Jenyns’s specialized video production company, Melbourne Video. With Jenyns positioned as the interviewee, he’s able to casually tell his story, while cut-away shots are in black and white to highlight past events. This filming technique makes it easy for viewers to follow Jenyns’s journey from his humble beginnings to where he is now. In addition to it featuring the characteristics of a successful entrepreneur, the video ultimately gives viewers hope that they too can achieve success by following in the footsteps of a fellow small business owner.

The newly launched video closes with Jenyns commenting that after “fourteen years, thirty thousand hours and I can finally say....this is where I want to be.” To learn Jenyns’s story about persistence and success in business, watch the video on YouTube: https://www.youtube.com/watch?v=_D16O-YAR4U

Follow his road to entrepreneurship success through his blog, http://davidjenyns.com/.