Robert A. Clifford of Clifford Law Offices, spoke on “Closing Arguments” at seminar sponsored by the Illinois Trial Lawyers Association on February 16th, 2015. 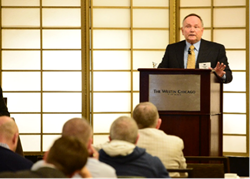 Robert A. Clifford speaking at the podium

Robert A. Clifford of Clifford Law Offices, spoke on “Closing Arguments” at seminar sponsored by the Illinois Trial Lawyers Association on February 16th, 2015

Robert A. Clifford, founder and senior partner at Clifford Law Offices, was invited to speak on “Closing Arguments” at the annual Damages Seminar sponsored by the Illinois Trial Lawyers Association (ITLA).

Bradley M. Cosgrove, partner at the Chicago based law firm, was the program planning co-chair of this half-day seminar held on February 16th, 2015, Presidents’ Day and a court holiday. The program was approved for four hours of continuing legal education credit (CLE). The Hon. Elizabeth M. Budzinski, associate judge, Law Division, Circuit Court of Cook County, closed the program with “Observations from the Bench.”

About Robert A. Clifford
Robert A. Clifford was named by Chicago Magazine as one of the top 100 Most Powerful Chicagoans for the past three consecutive years and Crain’s Chicago Business named Clifford once again as one of the “most influential people in Chicago" in 2013. Clifford remains committed to raising the quality of the practice of law in the state of Illinois and promoting civility. He was named the 2012 Chicago Lawyer Person of the Year. Based upon his trial accomplishments, and his contributions to the legal community and the Chicago area, his colleagues nominated him for the prestigious honor given to one person each year. He is the founder of Clifford Law Offices, a nationally recognized personal injury law firm in Chicago concentrating in aviation, transportation, personal injury, medical negligence, and product liability law. To learn more about Robert Clifford visit http://cliffordlaw.com/attorneys/robert­a­clifford/

About Clifford Law Offices
Clifford Law Offices is ranked one of the top law firms in Illinois as well as in the country in the area of complex personal injury and wrongful death cases such as medical malpractice, aviation litigation, products liability, premises liability and transportation litigation. It also has developed a reputation in qui tam litigation or whistleblower cases and handles class action matters as well as commercial litigation cases. To learn more visit http://www.CliffordLaw.com