Chinavasion has just launched a new mini PC stick and this is reportedly the world’s smallest computer running Windows 10. 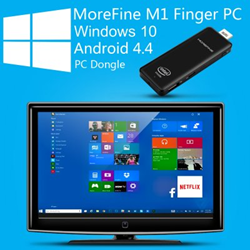 The MoreFine M1 is a dual boot PC stick that runs both Windows 10 and Android 4.4. It uses an Intel Atom Z3735F CPU and has 2GB of RAM. Ms. Rose Li, PR Manager at Chinavasion, says, “2015 has seen a lot of development in the mini PC field as rival companies try to secure a footing in this quickly developing market.”

Newcomers, MoreFine, have gone head to head with rivals and market frontrunners MeeGoPad, their M1 Mini PC is smaller than the MeeGoPad T02 alternative and retails at almost the same price, Rose Li, stated “Chinavasion was keen to offer our customers a wider choice of Android TV Box and Mini PC products, and while the hardware of the MeeGoPad and MoreFine are virtually the same the dual boot configuration of the MoreFine M1 is of real appeal to many of our clients.”

This clear distinction puts the MoreFine M1 in a separate group and helps it differentiate from other similar products from Intel, Lenovo and MeeGoPad.

With both Windows 10 and Android 4.4 available Ms. Li says, “The MoreFine M1 offers users all the apps they are accustomed to on their Android Smartphones or Tablets as well as the desktop computer software that's typical of a Windows operating system.”

“This usability makes the M1 suitable to college students, business men or travelers as it allows the user to turn any HDMI TV into a PC, meaning they can work from hotels, conference rooms, living rooms and many other locations.”

The MoreFine M1 has a micro SD card slot for 64GB of storage space and the availability of cloud storage makes that plenty for most users needs. This Mini PC also has good connectivity with Wi-Fi and Bluetooth wireless compatibility, as well as OTG and USB ports that allow the user to connect to a number of devices.

Rose Li says, “TV sticks have been big for some time with Chromecast and Roku, but 2015 has seen a revolutionary change as the Windows 10 stick becomes an ever more popular gadget. With so much competition from Chinese firms we are sure Chinavasion will remain at the forefront of offering great PC dongles and Windows TV Sticks to our customers. The wholesale company also reveals that the MeeGoPad T03 and T04 mini PCs will also be launched later this month.

China wholesale company, Chinavasion, is an international wholesaler of electronics and gadgets. Explore Chinavasion's full range of Android TV Box and Mini PC products, which are all available at wholesale prices and can be delivered by express services around the globe.