CHRISTMAS RIDE will have its first theatrical run September 19th-25th in Beverly Hills at Laemmle's Music Hall 9036 Wilshire Boulevard near Doheny. This debut will mark the film's first showing in DCP format, which is required by many theaters. 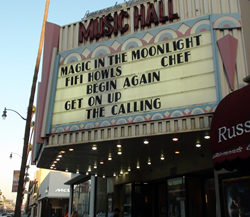 The story line: After hearing a frightening supernatural warning, Keri, a young mother, takes an urgent road trip south during the Christmas holidays with her two kids and a mysterious neighbor haunted by ghosts from his past. Keri faces dangerous situations and ultimately learns a heartbreaking truth which tests the limits of forgiveness.

Over sixty actors make up the cast of CHRISTMAS RIDE with the leads played by Brittney Ham and H. T. Altman. Child actors include Russell Walden and Reagan Britt Mullins who plan to attend the opening weekend of the film in Beverly Hills and be available for the
Q & A, as does the screenwriter. More about the actors may be found on the blog at http://christmasride.wordpress.com

The film includes a broad spectrum of music from classical and jazz to bluegrass and pop, including compositions by veteran Hollywood composer Kevin MacLeod and prize-winning singer songwriter Danny Jones, Edie Murphy (Los Angeles) as well as newcomers Kari Fleskes (TN). More about the musicians on http://www.artprofilms.com

At the Wheel, Poster for Christmas Ride featuring Brittney Ham