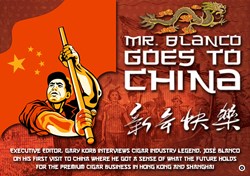 Blanco shares his experiences in Shanghai and Hong Kong with Cigar Advisor Executive Editor, Gary Korb. During the interview, Blanco talks about why he went to China, the state of the cigar business, smoking laws, the cigar lounges, and much more.

The all-new Cigar Advisor Magazine is an online cigar magazine that brings a fresh, irreverent, and down-to-earth perspective on all things cigars to thousands of smokers. In addition to educational cigar content and behind-the-scenes cigar industry articles from some of the business’s top names, Cigar Advisor delivers an array of content about a variety of topics of interest to people who enjoy the cigar lifestyle. The magazine also features cigar reviews and ratings submitted by real smokers. Cigar Advisor Magazine has posted a new feature story on the state of the cigar industry in Hong Kong and Shanghai. Entitled “Mr. Blanco Goes to China," the article features an interview with Jose Blanco, a legendary cigar industry veteran, long time executive with Miami Cigar & Co. in Santiago, The Dominican Republic, and more recently, co-creator of the highly-acclaimed CyB Cigars made with Dr. Alejandro Martinez Cuenca at Joya De Nicaragua Cigars in Estelí, Nicaragua.

Blanco shares his experiences in Shanghai and Hong Kong with Cigar Advisor Executive Editor, Gary Korb. During the interview, Blanco talks about why he went to China, the state of the cigar business, smoking laws, the cigar lounges, and much more.

The main reason for Señor Blanco's visit was through an invitation he received from some Chinese businessmen who are thinking of entering the cigar industry. His role was that of a consultant to help them evaluate the prospects of a premium cigar business in Hong Kong and Shanghai.

When asked about what he expected to find when he arrived, Blanco says, “What I saw impressed me! Cigar smokers know a good smoke, and the variety of age and style of the smokers was huge; just like in the U.S., all types of people can meet and enjoy cigars together all with that same common interest.”

Blanco also touches on the popularity of Cuban cigars, the surprising number of young cigar smokers, China-grown cigar wrapper leaf, and the annual China Dragon Cigar Festival that debuted in 2012.