Cigar Advisor Magazine is a digital publication dedicated to providing cigar enthusiasts with entertaining and informative content. Their January 2014 issue features a piece on the Wixarka tribe, an ancient culture based on intricate art work and farming a variety of crops including tobacco. 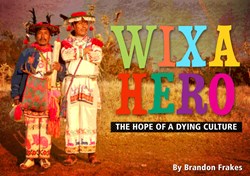 Tobacco is known to the Wixárika as “Ya” and “Macuchi Tobacco.” It is known to have been cultivated for thousands of years in the Sierra Madre Mountains for two cultural purposes.

The all-new Cigar Advisor is an online cigar magazine that brings a fresh, irreverent, and down-to-earth perspective on all things cigars to thousands of smokers. In addition to educational cigar content and behind-the-scenes cigar industry articles from some of the business’s top names, Cigar Advisor delivers an array of content about a variety of topics of interest to people who enjoy the cigar lifestyle. The magazine also features cigar reviews and ratings submitted by real smokers, and much more. Cigar Advisor Magazine has just released a new article written by Brandon Frakes, part of Wixa Hero entitled, "A Dying Culture" The article was published as an inside look into the Wixarika community in Mexico and their struggle for survival.

This tobacco growing community prides themselves on everything they do but their culture is being threatened by lack of fresh water and proper nutrition. To combat this problem, they have turned to their traditional artworks to help keep their community and culture alive. Brandon writes “Depending on the size, sculptures may have anywhere from 1,000 to 20,000+ beads, all placed individually. Meticulously, they create numerous traditional symbols seen during the ritual and within the finished work of art therein transcribing the message their Gods have orated. For comparison to our culture, the same emphasis we place on our alphabet and language, the Wixárika place on their language of symbols.”

Along with their rich artistic heritage, they use tobacco for many purposes. Brandon writes “Tobacco is known to the Wixárika as “Ya” and “Macuchi Tobacco.” It is known to have been cultivated for thousands of years in the Sierra Madre Mountains for two cultural purposes. The first is used during sacred celebrations and pilgrimages to their sacred land which is the San Luis Potosi Waterfalls. The Wixárika smoke one of the oldest versions of cigars - tobacco wrapped in corn husk. This is much like the cigars Christopher Columbus would have seen Native Americans smoking upon his arrival in the new world. This method of rolling cigars is still used today and is typically done during special rituals before a pilgrimage that celebrate the Fire God, “Tatéwari,” whom they believe gave them tobacco. “

About Cigar Advisor Magazine
Cigar Advisor Magazine is a digital publication created for real cigar enthusiasts who love tobacco and live the lifestyle. Cigar smokers are passionate about almost everything they do - whether it's the drinks they savor, the food they devour, the cars and motorcycles they dream of, the sports they're fanatical about or the women they love, Cigar Advisor shares those passions with a razor-sharp edge, soaking up each day and experience as if it were our last. Find that passion and more on display at CigarAdvisor.com.