Women of color remain underrepresented in technology and leadership, to the detriment of employers and the economy. IT executive Monica Eaton-Cardone explains how greater diversity can translate to financial and business advantages. 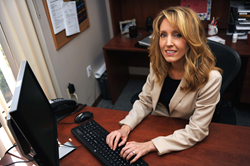 Monica Eaton-Cardone, an IT executive specializing in risk management and fraud prevention, discusses the benefits of hiring women of color in business and tech.

“Recruiting, retaining and promoting women of color can create significant advantages for companies and the economy as a whole,” explained Eaton-Cardone.

By 2060, women of color will account for over half of the U.S. female population; yet they hold just 11% of all science and engineering jobs, 10% of mid-level managerial positions, 5% of senior and executive management positions, and 4% of board seats.(1) Monica Eaton-Cardone, an IT executive specializing in risk management and fraud prevention, says this disparity harms businesses and the economy. She notes that research findings(2–9) make a strong case for the economic and competitive advantages of supporting multicultural women in technology and business.

Government forecasts predict significant gains for women of color in terms of population growth—which will climb 40% to 120%, depending on race/ethnicity(2)—and labor force increases, which range from 11.3% for black women to 30.3% for Hispanic women.(1) Eaton-Cardone believes employers would be wise to work on boosting multicultural female representation in their workforce given that racial and gender diversity have been associated with increased sales revenue, greater relative profits and more customers, while racial diversity was additionally linked to larger market share.(3)

Other recent studies further underscore the value of diversity in the workplace:

“Recruiting, retaining and promoting women of color can create significant advantages for companies and the economy as a whole,” explained Eaton-Cardone, who serves as Chief Information Officer (CIO) of Global Risk Technologies and Chief Operating Officer (COO) of Chargebacks911. “It’s not a matter of political correctness, it’s just smart business sense. The more diverse your workforce, the better your chances of connecting with a broad range of consumers across all demographics.”

Eaton-Cardone says organizations that overlook the economic power of minorities are undercutting their own bottom line. For example, a recent Nielsen report noted that black women “control the lion’s share of the African-American community’s $1.2 trillion in spending power” and are influencing mainstream American culture in such areas as civic engagement, environmental initiatives, fashion, television and music.(7)

“Failing to foster diversity creates a gap in capitalizing on the unique perspectives and entrepreneurial spirit that women of color bring to the table,” asserted Eaton-Cardone. “Leveraging diversity in business puts businesses ahead of their competition—the more diverse viewpoints and backgrounds in the workplace, the more collaboration and consequently, the more consumers one can attract.”

A number of industry leaders realize the potential and growing influence of women of color and are working to increase their representation in the workplace. After Altassian overhauled its hiring practices, its technical teams went from 11.5% female hires as of July 2015 to a 2017 entry-level cohort that was 57% women; in addition, 33% of its U.S. interns are now black and Latino/Hispanic.(9) Ernst & Young (EY) has also implemented a number of diversity initiatives, including a sponsorship program in its technology division that goes beyond mentorship by actively interceding to help women and minorities advance.(9)

Eaton-Cardone advises employers to review the research demonstrating the economic and business advantages of diversity, and to look to industry leaders for best practices in hiring, retaining and promoting women and minorities. She also urges women of color to explore the many programs and nonprofit groups that have emerged in recent years—including Women of Color in Computing(2)—and to leverage these resources in their ongoing push for greater representation in the workplace.

Monica Eaton-Cardone frequently discusses financial technology (FinTech) advances and opportunities for women in technology and business at industry conferences and events. She has been a featured panelist at TRUSTECH, the IATA World Financial Symposium and TRANSACT, and is also available for interviews and future speaking engagements. For more information, visit http://monicaec.com.

Monica Eaton-Cardone is an accomplished entrepreneur, speaker, author and industry thought leader who is internationally recognized for her expertise in risk management, chargeback mitigation, fraud prevention and merchant education. Eaton-Cardone found her calling as an entrepreneur when she sold her first business at the age of 19. She later became an eCommerce merchant; and after grappling with chargebacks and fraud, she took it upon herself to develop a comprehensive, robust solution that combined agile technologies and human insights. Today, Eaton-Cardone’s innovations are helping thousands of organizations achieve sustainable growth, and she continues to pioneer loss-prevention best practices as CIO of Global Risk Technologies and COO of Chargebacks911. Eaton-Cardone is a champion of women in IT and business leadership, and aims to inspire the next generation of young innovators through her nonprofit organization, Get Paid for Grades. Get to know her at http://www.monicaec.com.