Congressman John Lewis recognized The Links, Incorporated for their outstanding community service and influence during women's HERstory Month. He also issued a voter rights call to action for the premier women's organization of 15,000 professional women. Rising to the call The Links will raise their collective voices around the country and in Congress, to ensure every American has the ability to exercise their constitutional right to vote in preparation for the 2020 election. 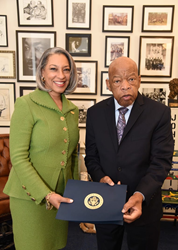 “Receiving your vote of confidence, Congressman Lewis, confirms that we are on the right track, focused on transforming lives and fulfilling our purpose.” said Dr. Jeffries Leonard.

August 6, 2019 marks the 54th anniversary of the Voting Rights Act, which was signed into law by President Lyndon B. Johnson. Many brave activists, like Congressman Lewis, shed blood so that African Americans could enjoy the voting rights they have today - a right that Congressman Lewis calls “precious” and “almost sacred.” Currently voting rights in America are under attack. When asked about how The Links, Incorporated could raise their collective voices in support of Congressman Lewis’ agenda, he responded, “We need everyone to have the ability to participate in the democratic process and be able to register and vote.” The Links, Incorporated is committed to this call to action in ensuring every American has the ability to exercise their constitutional right to vote, and is proud to have seven dynamic women in Congress as active members: Congresswoman Eddie Bernice Johnson, Congresswoman Joyce Beatty, Congresswoman Val Demings, Congresswoman Sheila Jackson Lee, Congresswoman Ayanna Pressley, Congresswoman Frederica Wilson, and honorary member Senator Kamala Harris. With 288 chapters in 42 states, and in the District of Columbia, the Commonwealth of the Bahamas and the United Kingdom, the organization will mobilize, galvanize and utilize across its vast reach to coordinate with elected officials on state and local levels in preparation for the 2020 election. “It is incumbent that every American hold their elected officials accountable to ensure voting rights are protected for generations to come,” Dr. Jeffries Leonard stated.

About The Links, Incorporated:
The Links, Incorporated is an international, not-for-profit corporation, established in 1946. It is one of the nation’s oldest and largest volunteer service organizations of extraordinary women who are committed to enriching, sustaining and ensuring the culture and economic survival of African Americans and other persons of African ancestry. Links members contribute more than 1 million documented hours of community service annually – strengthening their communities and enhancing the nation. The organization is the recipient of awards from the UN Association of New York and the Leon H. Sullivan Foundation for its premier programs, as well as the Golden Torch Award for Corporate Community Service from the National Society of Black Engineers. For more information, visit http://www.linksinc.org.