The CLINTEL World Climate Declaration that there is no climate emergency and we do have time has more than 1200 science and scholarly signatories, and thus collapses the climate catastrophe ‘consensus’ narrative, says Friends of Science Society. Likewise, since there is no emergency, society must abandon NetZero targets and ramp up conventional, reliable energy sources to stop the energy, food, fuel, fertilizer, and famine crises sweeping the world. 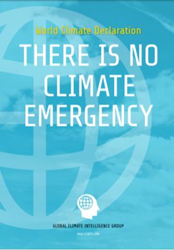 CLINTEL's World Climate Declaration is signed by over 1,200 international scientists and scholars, declaring there is no climate emergency. https://clintel.org/world-climate-declaration/

As reported by the Epoch Times on Aug. 26, 2022, more than 1,100 scientists signatory to the CLINTEL World Climate Declaration say there is no climate emergency, thus collapsing the ‘97% consensus’ claim of activists, says Friends of Science Society. The number of signatories has grown to more than 1,200 in the past few days since publication of the story.

Since there is no climate emergency, we do have time. Net Zero climate targets are unnecessary, says Friends of Science. The fear of a climate emergency came from the misuse of a scenario known as RCP 8.5, as shown by Roger Pielke, Jr., and Justin Ritchie in “Distorting the view of our climate future: The misuse and abuse of climate pathways and scenarios.” RCP 8.5 is an implausible scenario that is not “business-as-usual,” a fact acknowledged by ‘consensus’ scientists like Zeke Hausfather in Nature, Jan. 2020.

Italian professor Franco Battaglia has published a book in several languages titled “There Is No Climate Emergency” outlining the petition sent to the UN by CLINTEL signatories. Physics Nobel Laureate Ivar Giaever was the first signatory. Battaglia was part of a group of 100 dissenting Italian scientists who started the “No Climate Emergency” movement in 2019 which rapidly grew as CLINTEL developed.

Friends of Science has long disputed the claimed consensus, in their 2014 report “97% Consensus? NO! Global Warming Math Myths and Social Proofs.”

A health care paper by Davies and Bhutta (2022) titled “Geriatric medicine in the era of climate change” incorrectly gives the impression that climate change has only happened in the present time. Earth’s climate has had dramatic cyclical changes over 4.5 billion years of Earth’s history; geriatric patients are hardly a contributing cause.

OECD countries face >$78 trillion in pension liabilities according to a 2016 CITI Bank report, but using climate change, individual carbon footprints or Net Zero targets as a cover for decades of incompetent financial management and bad investments is cruel and disingenuous, says Friends of Science Society.

Friends of Science says the difficulty in trying to inform the public of these dangers is that large media collaborations, like Covering Climate Now and Poynter Institute’s agenda-driven fact-checking network (which drives Facebook censorship) have locked dissenting views out of the MSM press. Covering Climate Now has over 400 media signatory outlets and reaches an audience of 2 billion people with its fearmongering.

Covering Climate Now has never interviewed any of the CLINTEL scientists who dispute the claim of a climate emergency. In the spring 2020 magazine edition, Kyle Pope interviewed the director of Mad Max, who told journos “how to make climate fear compelling.” A new #FactsMatter Friends of Science/CLINTEL video shows there’s no climate catastrophe – things are getting better.

The Canadian Association of Journalists and others ran an opinion survey as to whether climate change should be reported as an emergency, driving activist – not accurate - reporting, says Friends of Science. This video deconstructs the faulty ‘logic’ and breach of journalistic ethics of the CAJ et al.

As Europe teeters on the brink of social and economic disaster due to the energy crisis, amplified by the Russian incursion into Ukraine, the developing world faces famine. Across the EU, blackouts and serious heat-or-eat poverty are predicted for this winter.