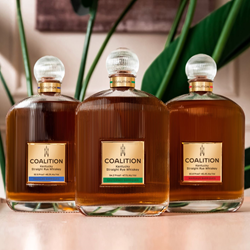 Our goal with Coalition Whiskey is to coax even more flavor out of our 100% Rye Whiskey.

A fascinating intersection of traditional hand-crafted American Whiskey and world-renowned French wines is on the horizon with the release of Coalition Whiskey – the first 100% Rye Whiskey finished in hand-selected Bordeaux wine barrels. Coalition Kentucky Straight Rye Whiskey comes in three separate expressions: Finished in Margaux Barriques (barrels), Pauillac Barriques, and Sauternes Barriques. For those wanting to taste where it all started, Coalition uniquely also offers the original base 100% Rye Whiskey at barrel proof. All expressions will be available in the US in January.

The 100% Rye Whiskey in Coalition Whiskey heralds from Kentucky Artisan Distillery in Crestwood, KY. It is created utilizing time-honored, true handcrafting techniques, including zero automation and an all-copper pot still dating back to pre-Prohibition. Attention to detail is paramount at each step in creating the blend of five-year-old Rye Whiskies, including selecting the rye grain from just one mile away from the distillery.

“A 100% Rye Whiskey is a true rarity in the industry,” said Thompson. “While most rye whiskies use malted barley or added corn, Coalition Whiskey is made completely from rye. It’s a more expensive way to go, but there was truly no other way to create that truly deep, rich and spicy flavor we knew would be the ideal match for our velvety Bordeaux wine barrel finishing.”

“It took the inspection of nearly 150 barrels just to find the perfect 25 we are using to finish our Rye Whiskey,” said Vanneron. “You have to first start with the best, most voluptuous wines from the finest chateaus in all of France to get the best possible barrels for Coalition Whiskey. Following up to nine months of finishing, each barrel from the separate Bordeaux wine appellations enhances the whiskey in a different, intriguing way.”

“Our goal with Coalition Whiskey is to coax even more flavor out of our 100% Rye Whiskey,” said Yangarber. “A keen understanding of the science behind Rye Whiskey served as the foundation for this grand experiment. From there, we could use our deep wine knowledge to pick just the perfect Bordeaux wine barrels to gently enhance the handcrafted whiskey. This is a deep, rich Rye Whiskey like you have never before tasted.”

The original, base Rye Whiskey is also offered to whiskey aficionados at full barrel strength (108.8 proof), allowing for side-by-side sampling to clearly identify how each Bordeaux barrel enhances the base spirit.

Coalition Whiskey comes packaged in an Art Deco-inspired ridged glass bottle echoing the cut crystal decanters made famous during the 1920s – Rye Whiskey’s heyday. It is crowned with a glass domed closure and accentuated with 18k gold accents, providing a hint to the precious liquid contained within.

Each Coalition Whiskey barrel finished expression retails at $90 MSRP. The barrel-proof whiskey retails at $130 MSRP. Coalition Whiskey can be found at fine whiskey stores in New York, New Jersey, California, Florida, Kentucky, Illinois and Colorado, as well as online at https://www.coalitionwhiskey.com. The company plans to explore additional barrel finishes in the near future.

About Coalition Whiskey
Coalition Whiskey was created when three whiskey fans had a radical thought: what if we found the absolute best wine barrels from world-renowned chateaus in Bordeaux – arguably the most famous wine region on the planet – and used them to draw even more flavor out of their favorite brown spirit. The result is Coalition Kentucky Straight Rye Whiskey Finished in Margaux Barriques, Pauillac Barriques and Sauternes Barriques. The “Coalition” is Leonid Yangarber, former CEO of Russian Standard Vodka USA; Steve Thompson, owner of Kentucky Artisan Distillers; and Ludwig Vanneron, a 20+ year veteran wine maker and global wine consultant. Together, they envisioned a new frontier for the industry using their collective skills to reimagine and elevate whiskey.