The popular heartthrob is set to charm viewers in a new way this Christmas, headlining four new holiday romances. 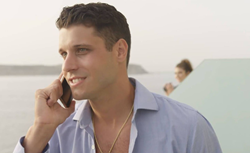 On the heels of the Big Brother 22 premiere on CBS, Gemelli Films has announced a slate of four holiday romances starring Cody Calafiore, one of the new “All Stars” season’s most popular returning houseguests. The films, shot prior to Calafiore’s return to the Big Brother house, will see the handsome and affable Big Brother 16 runner-up bring a varied slate of characters to life—from the spoiled son of a small town mayor to a lovelorn ranch hand—this Christmas.

“I love working with Cody,” says Candice Cain, writer and director of the holiday films. “Though we have a strong friendship off set, Cody shows up ready to work. He contributes so much and it’s been a joy to watch him grow since our first film in 2015.”

Cain plans on casting Calafiore in future projects, but is making Big Brother appointment television until then. “I know Cody is going to crush this season of Big Brother. My family and I will watch every episode!”

CBS kept the All Stars cast under wraps, so Calafiore’s holiday co-stars were surprised and delighted alongside America when Calafiore appeared:

Kenney Myers (“Talia,” “SHK HeroForce”) co-stars with Calafiore in the upcoming “Ivy & Mistletoe” (set for release by UPtv on November 1). Calafiore plays Max, the spoiled son of the mayor of Bethlehem, Pennsylvania, played by Carrie Genzel (“All My Children,” “Supernatural”). Myers says “Cody's work is so natural. It's easy to see why he's so well-liked and respected by his Big Brother housemates. That will definitely serve him well in this season!”

Calafiore’s co-star in “Magic in Mount Holly,” Taryn Hacker agrees. “Working with Cody shows you he's as kind and committed as he is hard working. It’s wonderful to have a scene partner and a friend in one. Sure, he’s smart, funny, and athletic, but his real advantage in the Big Brother house is being all those things and a genuinely great guy.”

“Cody brings so much heart to everything he does,” adds Brian Tyler Cohen, who plays Paul in the film and has acted alongside Calafiore since 2015’s “What Happened Last Night.”

“It’s impossible not to like him- both on-screen and off and that definitely gives him a strategic advantage in the Big Brother house.”

Clayton Snyder (“Ethan Craft” in the “Lizzie McGuire” franchise) plays Calafiore’s brother in “The Maltese Holiday,” partially on location in Malta notes, “working with Cody is something I really look forward to. He’s a great actor who brings a lot of joy and laughter to the set. There will always be plenty of both in the Big Brother All Stars house, while Cody’s there!”

Calafiore also stars in the Gemelli Films romance “Joy and Hope,” set on a ranch in Upstate New York this holiday season.