Selected as one of Maclean’s magazine’s “5 To Watch” in 2015, CommandWear looks to solve public safety’s most critical issue, using field-tested wearable technologies. 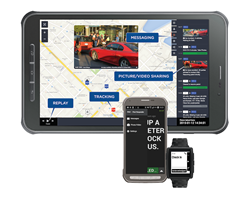 It's inspiring for us to witness Pebble’s role in CommandWear's public safety solutions, providing first responders with more reliable and effective situational awareness capabilities that help protect communities and themselves. -Shobeir Shobeiri, Pebble

CommandWear Systems Inc. is pleased to announce the release of its groundbreaking smartwatch and multimedia situational awareness solution for public safety agencies.

CommandWear is a simple-to-use, mobile, scalable and affordable platform that integrates smartphones, wearable devices, tablets, networks and applications to enhance situational awareness for first responders who need to keep their eyes, ears and hands on the job at all times.

The company has partnered with Pebble and enhanced CommandWear’s Communicator application for the Pebble smartwatch. With Pebble’s smartwatch and CommandWear’s two-way text messaging capabilities, first responders can now operate heads-up and hands free while receiving and responding to messages and orders from central command.

Extensive testing with first responders, including police and paramedics, found the Pebble smartwatch had several advantages:

CommandWear tested its smartwatch solution in noisy environments including major events with crowds numbering in the hundreds of thousands, with paramedics operating ATVs with loud engines and by police and paramedics on bicycles. First responders found the vibration of the smartwatch on their wrist allowed them to detect incoming messages that they would have missed on their radios or smart phones.

“At festivals, concerts and other large public events, noise levels can be at a height where you can’t hear yourself think, let alone hear radio communications,” explained Rod Salem, director of emergency management operations at BC Ambulance. “We have tried a number of different products, such as headsets similar to what pilots wear. And although they solve the noise issue, they are cumbersome and not conducive to caring for patients in the field.”

Founder and CEO of CommandWear, Michael Morrow, understands that technology has to be brought to the market only when its ready. “Wearable technology has been a focus of CommandWear from the beginning, but we are only bringing technology to the field when it’s ready for challenging environments. With the Pebble smartwatch, we have a solution that meets the demanding operational requirements of durability, long battery life and simplicity that all first responders need.”

“It's exciting to see Pebble become a part of the enterprise," said Shobeir Shobeiri of Pebble's business development team. "But it is even more inspiring for us to witness Pebble’s role in CommandWear's public safety solutions, providing fire, ambulance and police officers with more reliable and effective situational awareness capabilities that help protect communities and themselves in times of crisis."

The introduction of the Pebble smartwatch comes as part of CommandWear’s 2.0 introduction of multimedia capabilities into its situational awareness platform. Unlike today’s body-worn video technology which doesn’t support real-time transmission of recordings, CommandWear allows first responders to take photos and record video within the Communicator app on their smart phones and instantly upload them to their Command with a single click. The images are displayed on a situation map from the location they were taken and stored in CommandWear’s situational awareness database for immediate viewing and action, or later analysis.

CommandWear 2.0 is available now and sold through a tiered pricing model that ends up costing just pennies a day.

To learn more about CommandWear’s situational awareness platform, or how you can trial CommandWear with your first responders and security personnel, contact them at +1 (778) 328-3884 or info(at)commandwear(dot)com.

Commander App:
An easy-to-use situational awareness dashboard that gives commanders a comprehensive view of situations so they can quickly assess needs and risks and make intelligent decisions to better manage and protect first responders, to maximize their effectiveness in the field.

Communicator App:
Available on Android and BlackBerry smartphones (and soon iPhone), the Communicator App provides a local view of the situation for each responder and allows them to focus on the job while staying in touch with Command at all times. The app also tethers smartphones with wearables, such as smart watches and other body-worn devices, to deliver video and audio data back to the command centre in real-time.

CommandWear Hub:
A highly scalable, open and secure server that can be deployed in cloud or enterprise configurations, the Hub stores all location, status and communication information for playback, analysis and review.

About Pebble
Pebble is a customizable smartwatch that delivers information from your iOS or Android smartphone right to your wrist. It gives you the information you want when you want it – whether it’s checking your messages, seeing how many miles you’ve run, or changing your music, all without opening your phone.

Pebble is lightweight, waterproof, has a rechargeable battery that lasts 5-7 days, and is available in two different styles that were designed to be minimalist yet fashionable. The Pebble appstore has over 5,000 apps that make it more useful and mesh seamlessly with your life. Pebble is based in Palo Alto, California and launched on Kickstarter in 2012. Visit getpebble.com for more details.

About CommandWear
Vancouver-based software company, CommandWear, delivers real-time, simple-to-use, mobile situational awareness tools to first responders who need to keep their eyes, ears and hands on the job at all times.

Founded in 2013 by Michael Morrow, a 25 year pioneer in public safety technology, CommandWear’s mission is to solve the industry’s most critical issue – the lack of tools to support decision making at the last tactical mile.