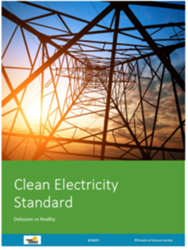 Climate activists do not appreciate that to decarbonize the USA alone without using any fossil fuels would cost US$290 trillion, or 13.5 times the U.S.A. 2019 gross domestic product

As COP27 – the UN Conference of the Parties to the 1992 Framework Convention on Climate Change approaches (Nov. 6-18, 2022 in Sharm El-Sheikh, Egypt) – the climate rhetoric heats up from Greta Thunberg, promoting her new book and rejecting greenwashing, as per this excerpt, published in The Guardian, Oct. 8, 2022, says Friends of Science Society.

UN Sec-Gen Antonio Guterres, promoting his new anti-greenwashing Net Zero group, bizarrely claimed “fossil fuel interests are now ‘cynically’ using the war in Ukraine to lock in a high carbon future,” as per a UN Press release of April 27, 2022. More recently, Petteri Talaas, Sec-Gen of the World Meteorological Organization (WMO) claimed "So from climate perspective, the war in Ukraine may be seen as a blessing," as reported by CTV News, Oct. 11, 2022, as he felt it would enhance renewables markets.

On Oct. 12, 2022, Euronews Green reported that Greta Thunberg supported Germany keeping existing nuclear plants on line, though also advocating for more renewables. Earlier this year she had [fumed on twitter about the EU labelling gas and nuclear as ‘green.’

Climate activists Naomi Klein and Bill McKibben held a webinar on human rights and climate justice in advance of the upcoming COP27 in Egypt titled: “Egypt’s Carceral Climate Summit.” US State Department and Travel Canada advise against staging protests in Egypt without a permit.

Naomi Klein claims that Egypt, as host state for COP27, creates a moral crisis for climate activists. Klein and McKibben reject natural gas and are also pushing for renewables. As outlined by the US EIA, Egypt is a crucial supplier of natural gas to the world, and this is an important income earning market for a country that imports some 80% of its wheat.

The world faces a confluence of critical shortages of fuel, fertilizer, and food – famine and civil unrest will be the result. As NECSI ‘s research found, the Arab Spring of 2011 was primarily driven by skyrocketing world food prices due to US Food-to-Fuel climate ethanol policies. That is surely a failing of the climate justice movement says Friends of Science, as thousands of people were driven to despair and died or were jailed in the violence.

Typically, wind and solar require substantial volumes of natural gas in order to operate on the power grid, as explained in Friends of Science Society’s report “What You Really Need to Know About Renewables (That the Pembina Institute Won’t Tell You)” and in their report and video rebutting Deloitte Insights and Climate Reality, titled “In the Dark on Renewables.” Europe, particularly Germany, is facing crisis scenarios due to the loss of natural gas imports from Russia, meaning large industrial businesses must cut back or shut down operations and blackouts are likely, as explained by Alexander Stahel in this Global Warming Policy Foundation report.

Power grid operations are complex. There is the need for 100% reliable conventional back-up power (typically natural gas) for renewables, but many climate activists don't understand this.

All wind and solar devices are made from astounding amounts of oil, natural gas, and coal, as explained by energy expert Vaclav Smil in this short article on the IEEE “To Get Wind Power You Need Oil.”

It is simply impossible to meet NetZero targets as energy economist Robert Lyman explains in “Magical Thinking: Why NetZero is Neither Possible nor Desirable” and “Why Renewables Cannot Replace Fossil Fuels by 2050.”

Friends of Science Society reports, like “Clean Electricity Standard NetZero 2030: Reality vs Delusion” compile the work of Professional Engineers conversant with such operations. Climate activists do not appreciate that to decarbonize the USA alone without using any fossil fuels would cost US$290 trillion, or 13.5 times the U.S.A. 2019 gross domestic product.

Neither the materials nor sufficient infrastructure elements could be mined and manufactured to meet the NetZero target dates.

Meantime, other climate activists are attacking biomass, apparently in a demarketing effort prior to COP27, according to this Friends of Science Society video rebuttal to CBC’s Fifth Estate program titled “The Big Burn.”

Why Renewable Energy Cannot Replace Fossil Fuels By 2050A detailed review of why renewables, which rely entirely on fossil fuels for their creations, cannot replace grid scale fossil fuel electrical power generation by 2050.