A new article in The Cleft Palate-Craniofacial Journal looks at whether or not early oral cleft lip and cleft palate surgeries affect test scores later in life. The researchers concluded that oral cleft type, as opposed to the timing of the surgery, is linked to poorer academic performance. 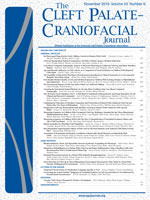 Studies like the present one, can put the potential threats into perspective because other factors more importantly impact these children’s neurocognitive development.

The Cleft Palate–Craniofacial Journal– Researchers have often suspected that early exposure to surgery and anesthesia is linked to cognitive impairment later in life. It has been thought that due to the timing of oral cleft surgeries, which are typically performed at an extremely young age, children with an oral cleft often experience cognitive dysfunction and academic underachievement. However, a recent study suggests that poor results on academic exams of children born with oral clefts are not related to early exposure to general anesthesia.

Researchers from the University of Southern Denmark and the University of Iowa recently published a study in the current issue of The Cleft Palate–Craniofacial Journal examining this theory. Because the definite age of maximum vulnerability to general anesthesia is unknown and widely debated, it is unclear whether academic achievement among adolescents is affected by undergoing oral cleft surgery at an early age. The researchers suspected that any potential neurotoxic effect caused by extensive exposure to anesthesia at an early age would show up in poor test results in ninth-grade final exams.

The researchers based their study on 558 adolescents from a nationwide Danish registry who had undergone surgery for cleft lip, cleft palate, or both while young. The researchers found that 509 of the oral cleft children had been exposed to anesthesia and had undergone at least one cleft operation. They compared the level of academic achievement of the students in the registry against that of a control group.

“This finding is remarkable,” said Dr. Nicola Clausen of the research group. “Studies like the present one cannot definitely prove that anesthetic drugs do not harm developing brains. However, it can put the potential threats into perspective because other factors more importantly impact these children’s neurocognitive development.”

The researchers concluded that oral cleft type, rather than the timing of anesthesia or number of cleft operations, is linked to poorer academic performance. Although the researchers saw no evidence in their study to suggest surgeons need to change their anesthetic methods, a neurotoxic effect due to anesthetics cannot be completely dismissed.

Full text of the article “Oral Clefts and Academic Performance in Adolescence: The Impact of Anesthesia-Related Neurotoxicity, Timing of Surgery, and Type of Oral Clefts,” The Cleft Palate–Craniofacial Journal, Vol. 54, No. 4, 2017, is now available at http://www.cpcjournal.org/doi/full/10.1597/15-185.