The 3-Day event will take place at over 25 bars in Nob Hill, Polk Gulch, Russian Hill, Cow Hollow and the Marina and will feature drink specials, DJs, a costume contest and party bus rides. 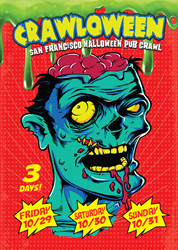 CrawlSF, a local events and marketing company, has been producing events in the San Francisco Bay Area since 2003. What started as a small event company, inspired by pub crawls attended on the East Coast by the founder, Matt Seliga, has grown into a successful business with signature events that attract thousands of people throughout the year. CrawlSF has produced some amazing events including Streets of San Francisco New Year’s Eve, San Francisco Mardi Gras, The North Beach Bar Run, Summersalt Music Festival, Wintersalt Music Festival, The San Francisco Burger Brawl, LepraCon and more.

Tickets for the event are currently priced at $25, however prices will rise as the event date gets closer. Admission price includes drink specials, free cover at all bars, DJs, a costume contest and party bus rides to the different neighborhoods.

Full details for the event are available at: https://www.crawloween.com

CrawlSF is a local San Francisco company that launched in 2003, shortly after the founder, Matt Seliga, moved from Baltimore to San Francisco for a Biotech Job. Being new to the city, Matt decided to bring the large, organized pub crawl concept to San Francisco as a way to meet new people and make a little extra money on the side. After leaving the Biotech world behind in 2008, he has focused on producing events. The Co-Founder of Eye Heart SF, M Ride and Pinchit.com, Matt has developed a number of business ideas in the events vertical. CrawlSF has produced well over 200 events since the first event in 2003 with an estimated 240,000 attendees over the years. Despite the increasing size and number of events each year, the company is still only run by two people, Matt and his fiancé Caitlin. CrawlSF Signature Events include: