Jon Barlow joins Crowdnetic’s advisory board and is added as special keynote speaker for Crowdfinance 2015: the Evolution of Global Marketplace Lending. 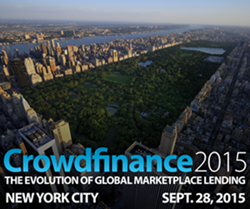 Crowdnetic, a leading provider of technology and market data solutions to the marketplace lending and crowdfunded-securities industries, announces the addition of Jon Barlow to its advisory board and as special keynote presenter at Crowdfinance 2015.

Crowdnetic, a leading provider of technology and market data solutions to the marketplace lending and crowdfunded-securities industries, announces the addition of Jon Barlow to its advisory board and as special keynote presenter at Crowdfinance 2015. Produced in partnership with Thomson Reuters, the world’s leading source of intelligent information for businesses and professionals around the globe, this year’s conference will focus on the marketplace lending industry, also known as peer-to-peer lending.

“As new forms of alternative finance continue to grow, they are increasingly attracting the attention of more players from the traditional finance space. We are proud to be a part of this innovative industry and to have the chance to provide the necessary technology and infrastructure for this emerging asset class,” says Luan Cox, co-founder and CEO of Crowdnetic. “We are incredibly pleased and honored to announce the addition of Jon Barlow to our advisory board. Jon is a visionary and leader in the marketplace lending industry and his future involvement in Crowdnetic will be extremely valuable to our continued growth.”

Jon Barlow is the founder and former CEO of Eaglewood Capital Management, a leading asset management firm that specializes in online and marketplace lending investment strategies. In 2014, Mr. Barlow led the sale of Eaglewood Capital to an affiliate of Marshall Wace LLP (MW Eaglewood), a London-based alternative asset manager. He served as MW Eaglewood’s global CEO, overseeing its New York and London business units, and as a member of its board of directors until his departure in 2015. During his tenure at Eaglewood, Mr. Barlow assisted with the successful initial public offering of P2P Global Investments (ticker “P2P”), the world’s first publicly traded peer-to-peer debt investment vehicle, on the London Stock Exchange. He also accepted several industry awards on the firm’s behalf for completing the first ever securitization of marketplace lending loans.

“Over the past few years, Crowdnetic has emerged as a distinct leader within the marketplace lending and online-securities industries, building a respected reputation by providing much-needed transparency through data and technology solutions to these rapidly growing industries,” says Barlow. “I was proud to be selected as the keynote speaker for their annual Crowdfinance Conference and am thrilled to also announce that I will be joining this pioneering company’s advisory board.”

Last year’s event was sold out, and Wall Street’s third inaugural Crowdfinance Conference is expected to be the largest yet. In order to accommodate increased demand, the event has moved to Thomson Reuters’ New York Financial District Conference Hall.

Please visit http://www.crowdfinance2015.com to purchase tickets or to obtain more information on sponsorship details for Crowdfinance 2015.

With offices in New York City and London, Crowdnetic Corporation is a leading provider of technology, infrastructure and market data solutions to the marketplace-lending and crowdfunded-securities industries. Through its sophisticated technology solutions, in-depth research reports and industry-leading conferences, the company provides infrastructure and transparency for the global alternative finance marketplace. Crowdnetic's data and technology solutions are used by hedge funds, family offices, asset managers, venture capitalists and investment banks. Crowdnetic owns and operates Lendvious.com, CrowdneticWire.com, CrowdWatch.co and produces leading industry events, such as the upcoming Crowdfinance2015.com.