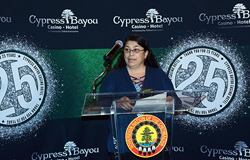 This month we are celebrating our 25th anniversary and thanking our guests with spectacular giveaways.

For 25 years, Cypress Bayou Casino Hotel has enjoyed substantial growth and expansion in St. Mary Parish. The Chitimacha Tribe of Louisiana, owners of Cypress Bayou Casino Hotel, has held steadfast in their vision to become south Louisiana’s premier entertainment destination. The property came from humble beginnings as Chitimacha Bayouland Bingo and transformed into the sprawling entertainment complex it is today. There have been many expansions and subsequent renovations which provided much needed projects for local contractors. It is estimated that the property has had an economic impact of nearly $1 billion dollars on the region, which includes: $670 million in salaries and benefits, $202 million paid to Louisiana vendors, and millions of dollars donated to local charities.

“It is through the continued patronage of our guests, the dedication of our team members, the long-lasting partnerships with our vendors, and support from the surrounding communities that we have been able to provide world-class entertainment at such an unprecedented level,” said Richard Picard, Director of Public Relations and Advertising at Cypress Bayou Casino Hotel. “This month we are celebrating our 25th anniversary and thanking our guests with spectacular giveaways. Our $125K Anniversary giveaway is a prime example of our commitment to delivering an unparalleled entertainment experience to the communities in which we serve,” continued Picard.