“Daring Roman Escape” from Christian Faith Publishing author Dani CB Cole is a plot-driven story of the Asher family who is desperate to be released so they can spread joy and hope that a Savior, as was foretold, is coming soon. 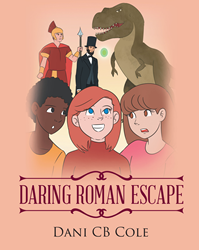 “Daring Roman Escape”: a meaningful story that takes the reader back to scenarios and events that happened in ancient Rome. “Daring Roman Escape” is the creation of published author Dani CB Cole, a Christian mother who loves writing children’s books, as she desires to be part of the process that keeps children engaged in the joy of reading.

Cole writes, “This unlikely time-traveling crew uses bravery, hilarious banter, and a little humbleness to rescue a family in ancient Rome. The group must help the Asher family escape from being fed to lions in the gladiator arena. The Ashers are desperate to be released so that they can herald the way for the coming of the Messiah. With salvation and the promises of God at stake, the crew is empowered to get past the fear of detection, menacing guards, frightful dungeons, Roman soldiers, and a mysterious glowing orb as they race to free the captives.”

Published by Christian Faith Publishing, Dani CB Cole’s new book is a notable story that explains unforgettable scenarios that use bravery, hilarity, and humbleness in rescuing a family in ancient Rome.

With this purpose, Cole aims to remind readers of the importance of heralding the coming of the Messiah; as through Him comes freedom, deliverance and salvation.

View a synopsis of “Daring Roman Escape” on YouTube.