‘Anybody Seen Dan Lovett?’ shares panoply of global experiences from perspective of 50 plus years in broadcasting. 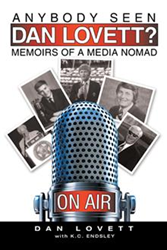 “Dan Lovett was an important part of Eyewitness News History.” – Al Primo, founder of the original EWN at WABC-TV in 1968 in New York City.

Sportscaster, accredited war correspondent and broadcast journalist Dan Lovett shares a history of his broadcasting career in his new autobiography, “Anybody Seen Dan Lovett?: Memoirs of a Media Nomad” (published by Balboa Press).

Lovett’s career in sports and news broadcasting on television and radio spanned nearly 50 years. In that time he worked for ABC, covered major sporting events and worked as a war correspondent. His journey took him from the potato fields of Idaho to his first, full-time broadcast job in Missouri and on to Texas, New York, Washington D.C., California and Ohio.

Within “Anybody Seen Dan Lovett?” Lovett compares days gone by from the ’60s, ’70s and ’80s to broadcasting circles in the current time. He discusses sporting events he covered and the relationships he developed with athletes, humorous side-bars of mingling with celebrities, and stories of his travels through the broadcast industry and the relationships he built with media celebrities.

“Anybody Seen Dan Lovett?” comes out to much acclaim from well-knowns in sports and media:

“Dan Lovett was an important part of Eyewitness News History.” – Al Primo, founder of the original EWN at WABC-TV in 1968 in New York City.

“A man’s man in the true sense of the word. Dan has the unmatched ability to put your mind into his story.” – Dan Pastorini, former Houston Oilers quarterback.

About the Author
Born in South Dakota and raised in Idaho, Dan Lovett’s first full-time, on-air job came in 1959 with KWOS radio in Jefferson City, Missouri, only two weeks after graduating from high school. Within two years, Lovett became a daily television news anchor in Jefferson City and by 1964 had been hired by KILT radio in Houston, Texas, where he was assigned to cover the war in South Vietnam. At age 24 he was the youngest accredited correspondent from the U.S. in Southeast Asia. In 1968 KTRK-TV, the ABC affiliate in Houston, named Lovett as the station’s lead sports anchor. Lovett reached the pinnacle of his career when he joined the original EWN at WABC-TV, channel seven in New York. In addition, he hosted a daily network radio sportscast for ABC and was a member of ABC Sports for six Olympics. Lovett was named to the Texas Radio Hall of Fame in 2003.

Balboa Press, a division of Hay House, Inc. – a leading provider in publishing products that specialize in self-help and the mind, body, and spirit genres. Through an alliance with indie book publishing leader Author Solutions, LLC, authors benefit from the leadership of Hay House Publishing and the speed-to-market advantages of the self-publishing model. For more information, visit balboapress.com. To start publishing your book with Balboa Press, call 877-407-4847 today. For the latest, follow @balboapress on Twitter.
###