Recent release “Circle of Killers: Two Million Dollars, Making the Rounds” from Page Publishing author Danny Ghaffouri is a gritty and fast-paced crime drama introducing Larry Pierce, a veteran Los Angeles police officer counting the days until his retirement. His plans are foiled by his nephew’s involvement in a drug deal gone horribly awry and a burning desire to clear the family name. 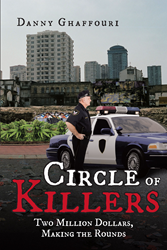 During a drug deal, two men shoot and kill each other in a parking garage over an attaché containing two-million dollars. Aram, an indie filmmaker seeking a loan for his next project, witnesses the drama, sees no one else around, grabs the money and drives off.

The younger of the two men killed is a super narc. His uncle, Larry Pierce, "a cop's cop", is a thirty-two year veteran of the LAPD. Larry's desire to retire and enjoy his family is now ruined because of his nephew's dastardly act. Still, Larry resolves to clear his nephew's name, not knowing that the entire drug deal and shooting is captured on tape by a devious electronic whiz within the department.

Readers who wish to experience this engrossing work can purchase “Circle of Killers: Two Million Dollars, Making the Rounds” at bookstores everywhere, or online at the Apple iTunes store, Amazon, Google Play, or Barnes and Noble.

Page Publishing is a traditional New York-based full-service publishing house that handles all the intricacies involved in publishing its authors’ books, including distribution in the world’s largest retail outlets and royalty generation. Page Publishing knows that authors need to be free to create - not bogged down with logistics like eBook conversion, establishing wholesale accounts, shipping, taxes, and the like. Its roster of accomplished authors and publishing professionals allows writers to leave behind these complex and time-consuming issues to focus on their passion: writing and creating. Learn more at http://www.pagepublishing.com.