Dave McGillivray To Attempt His 47th Consecutive B.A.A. Boston Marathon After Having Open-Heart, Triple-Bypass Surgery Only Six Months Ago 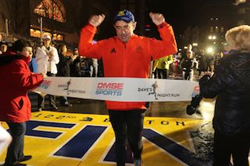 Without question, this will be my most challenging marathon ever,” said McGillivray. “The 30,000 runners in the race are my number one priority. I only start thinking about my own run later in the afternoon when the final finishers are nearing the end of the race.”

Renowned race director and endurance athlete Dave McGillivray will attempt to run the 123rd B.A.A. Boston Marathon just six months after undergoing open-heart, triple-bypass surgery on October 12, 2018. This will be McGillivray’s 47th consecutive running of the world-famous marathon, of which he is race director. McGillivray will make his attempt after completing his official race day duties.

“Without question, this will be my most challenging marathon ever,” said McGillivray. “The 30,000 runners in the race are my number one priority. I only start thinking about my own run later in the afternoon when the final finishers are nearing the end of the race.” Depending on how the day unfolds, he expects to start in the late afternoon and finish between 10:00-11:00 pm.

McGillivray added, “This is not the best way to prepare to run a marathon, but I really don’t have many other choices.” This will be McGillivray’s 156th competitive marathon, his 47th Boston Marathon, and the 32nd time running the race at night.

McGillivray’s medical team is supportive but also cautious about his attempt to run the marathon so soon after surgery. “As long as Dave prepares adequately, listens to his body, and is prepared to adjust his expectations as appropriate for being 6 months out of open- heart surgery he should do fine,” said Dr. Aaron Baggish, McGillivray’s cardiologist.

“Dave knows his own body better than anyone and I support his efforts as long as he takes it slow and remains patient throughout his run,” said Dr. David D’Alessandro, McGillivray’s heart surgeon from Massachusetts General Hospital. McGillivray said he asked D’Alessandro before the surgery if he thought he could run the marathon six months later, and his surgeon said, “I would be extremely disappointed if you couldn’t.”

McGillivray was released from Massachusetts General Hospital four-and-a-half days after his surgery. He first started a walking program and eventually progressed to running without walking. He ran a half marathon in early March; his longest run the past seven months has been 18 miles. “I have my good days and I have my not-so-good days,” McGillivray said. “My breathing is still labored but I’m making progress. For me, the only bad day I could ever have anymore is if I didn’t wake up at all. I consider every day now as a gift.”

This year, thirteen other running friends will be joining him, including nine who participated alongside McGillivray in the 2018 World Marathon Challenge, running seven marathons in seven days on seven continents. They will be supported by McGillivray’s brother, Bob, and long- time friend Ron Kramer, who will leap-frog the group down course while providing water and food as needed. A few medical professionals will also join them as a precaution.

In addition to directing major, competitive road races like the B.A.A. Boston Marathon and the TD Beach to Beacon 10K in Maine as the owner of DMSE Sports, McGillivray, 64, is known for pioneering the marriage between philanthropy and athletics, completing feats of endurance for good causes.

This year, McGillivray will run the Boston Marathon as part of Team Big Heart, the marathon running team for the Joseph Middlemiss Big Heart Foundation with a personal fundraising goal of $100,000. The non-profit was formed by the parents of six-year-old Joseph Middlemiss, who died in September 2013 from cardiomyopathy. The funds raised by McGillivray and others will be invested in the foundation’s mission to contribute to research for and spread awareness of childhood heart conditions while providing financial, social, and emotional assistance to families impacted by these illnesses. “I can’t think of a more appropriate and deserving cause than this one,” explained McGillivray. Joseph’s younger brother, Jack, was born with the same condition and only a year ago underwent a successful heart transplant procedure.

To donate to the JMBHF on behalf of McGillivray’s run, visit:
https://www.crowdrise.com/o/en/campaign/joseph-middlemiss-big-heart-foundation-boston-2019/davemcgillivray
McGillivray, a resident of North Andover, Mass., is also known as an inspirational speaker who gives talks to schoolchildren and groups throughout the country. He published a children’s picture book in 2018 called Dream Big about his first attempt at running the Boston Marathon and based on his 2006 autobiography, The Last Pick, which intimately recounts the mental and physical obstacles McGillivray faced that led to his 1978 cross country run. In 2019, McGillivray will launch his second illustrated children’s book, Running Across America: A True Story of Dreams, Determination, and Heading for Home, which chronicles his 1978 run. Proceeds from the new book will benefit the Jimmy Fund.

About the Joseph Middlemiss Big Heart Foundation
The Joseph Middlemiss Big Heart Foundation, Inc. is a 501(c)(3) charitable foundation that educates children about the power of kindness by supporting the efforts of schools (creating and leading motivational assemblies, providing books and related resources), and empowering school-aged children and young adults by providing scholarships for music, dance, and martial arts. Its mission is to contribute to research for and to spread awareness of childhood heart conditions while providing financial, social, and emotional assistance to families impacted by these illnesses. The JMBHF was founded in 2014 by the parents of six-year-old Joseph S. Middlemiss, who died from a life-long struggle with cardiomyopathy.

About DMSE Sports
Founded by Dave McGillivray in 1981, DMSE Sports is a leader in sports event management, specializing in creating and producing mass participatory athletic events throughout the U.S. DMSE works with the B.A.A operations team in overseeing all the logistics and technical operations of the B.A.A. Boston Marathon, and manages the TD Beach to Beacon in Maine, the New Balance Falmouth Road Race on Cape Cod, the Harvard Pilgrim Finish at the 50 at Patriot Place, the Feaster Five Thanksgiving Day Road Race, and the Bellin Run in Green Bay, Wis., among others. For additional information on McGillivray or DMSE Sports, visit http://www.dmsesports.com or find DMSE on Facebook and Twitter.

Dave McGillivray Athlete|Entrepreneur|MotivationalSpeaker|Philanthropist|Accomplisher
Athletic Accomplishments
·    David McGillivray first gained national prominence in 1978 when he ran across the United States to raise money for the Jimmy Fund. Ran 3,452 miles from Medford, OR, to Medford, MA in 80 consecutive days, averaging 45 miles per day, to raise money for the Jimmy Fund, a charity which supports research towards eliminating cancer in children. This run ended in Fenway Park to a standing ovation by 32,000 fans. Since then, McGillivray has accomplished numerous other inspirational and charitable feats, as well as earned a reputation as one of the world’s premier race directors.
·    In 1980, he entered the Hawaii Ironman Triathlon and finished 14th. He was the 30th person to have ever completed an Ironman. He completed the event again in 1983-1989 and in 2014 for a total of 9 times.
·    Also, in 1980, McGillivray ran the East Coast —1,250 miles from Winter Haven, Florida, to Boston, joined by Bob Hall, a pioneer in wheelchair marathoning, to raise money for the Jimmy Fund. They met with President Carter at the White House during the trek through Washington, D.C.
·    In 1980 he ran 120 miles in 24 hours through 31 communities in southeastern MA for the “Run for Our Dreams Marathon.” The run ended in Foxboro Stadium (now Gillette Stadium) at halftime of a New England Patriots game. The ultra-marathon benefited the Wrentham State School for the Mentally Retarded; it raised more than $10,000 for the handicapped.
·    In 1981, he completed an ultra-triathlon (ran, cycled and swam) of 1,522 miles throughout the six New England states, raising $55,000 for the Jimmy Fund. Unusual segments of the event included running up and down Mt. Washington in New Hampshire, swimming two miles across Lake Winnipesaukee, swimming 1-mile from Woods Hole, MA toward Martha’s Vineyard, running three miles with inmates inside Walpole State Prison, and finishing in Foxboro Stadium in front of 60,000 people.
·    Officially completed his New England run by swimming more than seven miles from Martha’s Vineyard to Falmouth, MA, again raising more money for the Jimmy Fund. McGillivray was greeted by thousands on shore including some of the world’s greatest runners, including Alberto Salazar.
·    McGillivray ran the 1982 Boston Marathon in a time of 3:14 while completely blindfolded and while being escorted by two guides. He raised more than $10,000 for the Carroll Center for the Blind in Newton, MA.
·    In 1983, he swam for 24 consecutive hours in the Olympic-size Medford HS pool, swimming a total of 1,884 lengths and covering 26.27 miles (distance of the Boston Marathon) to raise money for the Jimmy Fund.
·    That same year, he raised money for a scholarship fun for his alma mater, Merrimack College, by bicycling more than 1,000 miles throughout six New England states in 14 days.
·    Again, raising money for the Jimmy Fund, McGillivray biked for 24 consecutive hours around a five-mile loop course in Medford, MA while simultaneously directing the annual Bay State Triathlon, being held on the same course at the same time. He covered a total of 385 miles.
·    In 2004, McGillivray ran across the country again, this time with nine other veteran marathoners, in relay style, from San Francisco to Boston as part of TREK USA, an event he founded and raised more than $300,000 for five children’s charities.
·    In 2018, he completed the World Marathon Challenge, running 7 marathons in 7 days on 7 continents.
·    He has run 155 marathons; 46 consecutive Boston Marathons (with 31 run at night after his race director duties are fulfilled).
·    Marathon personal best: 2:29:58.
·    Ironman personal best: 10:36:42.
·    McGillivray has run his birthday age each year since he was 12 years old.

Professional Accomplishments
·    Since 1988, he has been the Technical and Race Director of the Boston Marathon. He manages and oversees all technical and operational aspects of the oldest and most prestigious marathon in the world.
·    2000 - Chosen Race Director of the Year by Road Race Management/Running Times Magazine.
·    2000 - Lifetime Achievement Award by Competitor Magazine for more than 30 years of service to the sport of road racing and triathlons.
·    2003 – The DMSE Children’s Fitness Foundation was established with a focus on funding nonprofit organizations that use running as a vehicle to promote physical fitness in children.
·    2005 – Inducted into Running USA’s Hall of Champions.
·    2006 – Co-authored The Last Pick (Rodale Press) with Linda Glass Fechter. It chronicles his career while motivating and inspiring readers never to underestimate their own ability to set and achieve goals.
·    2007 – Named “Hero of Running” by Runner’s World Magazine.
·    2009 – Awarded the prestigious “Jimmy Award” from the Jimmy Fund of Boston for his 30-year association and his work with helping to raise money to fund cancer research at the Dana-Farber Cancer Institute.
·    2011 – Inducted into the USA Triathlon Hall of Fame.
·    2014 – Listed as #6 on Runner’s World Magazine’s “The 50 Most Influential People in Running”.
·    2015 – Recipient of MarathonFoto/Road Race Management Lifetime Achievement Award.
·    2017 – Inductee into the Road Runners Club of America Long Distance Running Hall of Fame, joined by Ryan Hall, Desiree Linden, and George Hirsch.
·    2018 – Co-authored Dream Big, with Nancy Feehrer, a children’s illustrative book based on his first attempts at running the Boston Marathon.
·    McGillivray, DMSE Sports and his DMSE Children’s Foundation have raised more than $100 million for various charities, including: The Jimmy Fund, Carroll Center for the Blind, Cystic Fibrosis, Lazarus House, Massachusetts Dietetic Association, Massachusetts Special Olympics, Mothers Against Drunk Drivers (MADD), Muscular Dystrophy Association, Sports Museum of New England, Wrentham State School.
Here is more news and information about DMSE Sports.