David’s Family Had Plenty of Drama, But What If There Was Even More Than We Thought? 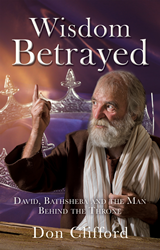 All Christian and Jewish adults will enjoy this historical mystery based on the secret behind Absalom's revolutionary coup of his father David's throne.

David’s fall from war hero to adulterer and murderer is pretty popular, as Bible stories go. But what if there is even more to the story? Clifford used a careful reading of 2 Samuel to develop this historical mystery revolving around David’s personal adviser and close friend…...Bathsheba’s grandfather!

“All Christian and Jewish adults will enjoy this historical mystery based on the secret behind Absalom's revolutionary coup of his father David's throne,” said Clifford.

Don Clifford is a lay Christian, now retired as a physicist and engineer from the aerospace industry. He has led Bible studies for over 60 years, served on the Executive Board of the Missouri Baptist Convention, and founded and presided over Agape Communications, the owner and operator of Christian radio station KSGL. Clifford and his wife, Karen, are co-authors of Grace Enough for Three and Heavenly Grief.

Xulon Press, a division of Salem Media Group, is the world’s largest Christian self-publisher, with more than 15,000 titles published to date. Wisdom Betrayed is available online through xulonpress.com/bookstore, amazon.com, and barnesandnoble.com.