‘The Sermon on the Mount’ finds similarities between biblical passages, teachings of Qur’an 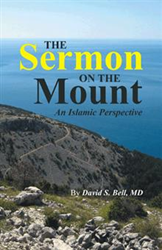 David S. Bell, a pediatrician, was brought up as a Protestant. This changed in 1973, when he became a Muslim. Although his life chapter spent as a Protestant came to a close, his Protestant teachings stayed with him, resulting in a startling revelation: Islam and Christianity share striking similarities.

Distraught at how Islam is often presented in the media, Bell hopes to enlighten readers to the two religions’ similarities with his new book “The Sermon on the Mount: An Islamic Perspective” (published by Trafford Publishing).

While Bell has studied Islam for more than 40 years, he still holds on to pieces of his Protestant beliefs, primarily the nine beatitudes. In “The Sermon on the Mount,” he parallels the wordage of the beatitudes with those found in the Qur’an, noting their many similarities.

An excerpt from “The Sermon on the Mount”:

“It has always amazed me that people of different religions find ways to fight with each other, even when few, if any, real differences exist. There are lots of differences in cultures, and I find them rich, fascinating and unique. But in matters of faith, there are few substantive differences. And what differences may exist are due to our ignorance, not God’s confusion.”

About the Author
David S. Bell, a pediatrician in practice in upstate New York, became a Muslim in 1972. In 1976, he completed his pilgrimage, something all Muslims must attempt. Following many discussions with Christians, he realized just how poorly Islam is represented in the media. He hopes to remedy this with the publishing of his book, “The Sermon on the Mount.”