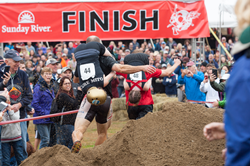 Finalists race to the finish.

Finishing with a time of 55.95 seconds, North American Wife Carrying Champions Olivia Rowling and Jerome Roehm of Team Lovebirds from Newark, Delaware, were crowned the winners of the 20th annual event held at Sunday River Resort.

Team Lovebirds competed against 44 other couples to make it to the final round against competitors Christine Arsenault and Jesse Wall of Team Cure Mito, from Oxford, Maine, who finished the race with a time of 1:02:34. Team Lovebirds took home six cases of beer in addition to five times Rowling's weight in cash, totaling $555. Team Cure Mito took home Arsenault's weight in beer and two cases of soda.

Third place was awarded to Melissa Vigue and Nathan Lewia of Team CrossFit Couple from Wells, Maine with a time of 1:04.36, who beat out Amy and Jesse Mead of Team Sisu Mentality from Portland, Maine, with a time of 1:08.88. First place for the Clydesdale category-a couple who have a combined weight of over 350 pounds-was awarded to Liza and Adam Drew of Team Bottoms Up, from Harrisville, New Hampshire with a time of 1:16.38. Team Cure Mito also won the combined age of over 80 category.

Rowling and Roehm of Team Lovebirds are first-time winners of the competition, and they intend to travel from Delaware again next year to compete and defend their title. Team Cure Mito, who are multi-year champions including in 2018, was dethroned this year with a time only 3.62 seconds slower than their 2018 time.

Built to international specifications, the North American Wife Carrying Championship course is 278 yards in length, with two log hurdles, and one water obstacle often referred to as the "Widow Maker." The choice of hold is up to each couple, most of whom choose the Estonian Carry where the woman's thighs rest on the man's shoulders in an upside-down piggyback. Helmets are not required but often used. For 2019, couples traveled from as far as California to compete.

Based on the 19th-century Finnish legend, wife-carrying became a sport as a result of men stealing wives from neighboring villages as means to prove their worth and strength to famed henchman, Herkko Ronkainen, also known as Ronkainen the Robber. Men who were able to carry their stolen wives in the wilderness, over stones, stumps, fences and springs, were accepted into Ronkainen's privileged group of thieves.

For media inquiries, please contact Karolyn Castaldo, Director of Communications, at karolyn.castaldo@sundayriver.com or 207-824-5218. For more information about Sunday River Resort, visit SundayRiver.com. Permission to use and distribute photos and videos from this release is granted with credit to Sunday River Resort.

About Sunday River Resort: Sunday River Resort is located minutes from picturesque Bethel Village in western Maine's Mahoosuc Mountains. A true four-season destination, Sunday River offers eight interconnected peaks of world-class skiing and snowboarding, an 18-hole golf course at the Sunday River Golf Club, two resort hotels and an inn, and numerous events throughout the year. Sunday River is a member of the Boyne Resorts family of resorts and attractions.

About the North American Wife Carrying Championship: The North American Wife Carrying Championship was founded in 1999 at Sunday River Resort in Maine and has been held annually in mid-October at this location ever since. The North American Championship holds registration spots open for winners of any sanctioned state, provincial, or regional wife carrying events, and provides entry to these competitors at no cost, then opens any remaining spots for public registration. The winning team brings home the wife's weight in beer and five times her weight in cash. More information at wife-carrying.org.