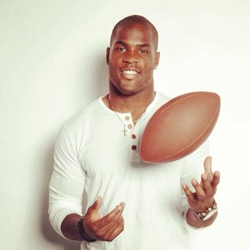 "I have been presented with many merchandise opportunities in the past, but what I like about my partnership with FanPrint is that my fans play a direct role in the process" said Murray.

FanPrint has teamed up with the NFL’s leading rusher and Dallas Cowboys star running back, DeMarco Murray. As part of the partnership, Murray’s fans will have the opportunity to design exclusive products using DeMarco’s name and likeness. These products will be officially licensed by the NFLPA and sold on: http://www.FanPrint.com.

Like all FanPrint NFLPA licensed products, a portion of the proceeds will benefit the Gene Upshaw Player’s Assistance Fund, which helps athletes who have fallen on hard times. DeMarco Murray has chosen to donate his royalties to his foundation, The DeMarco Murray Foundation, which helps to better the lives of Dallas ­area youth.

“Dallas Cowboys fans are the most passionate fans in the world,” said Murray. “”I think it’s cool that my fans have the opportunity to design for a good cause. I have been presented with many merchandise opportunities in the past, but what I like about my partnership with FanPrint is that my fans play a direct role in the process.”

“At FanPrint we are selective about our athlete partnerships,” former Dallas Cowboy, Darren Woodson, FanPrint’s founding investor and Director of Business Development said. “I was personally proud to partner with DeMarco, a current Dallas Cowboy who exemplifies exactly what we are looking for in an athlete partner. He matches FanPrint’s core brand, which is young, break­out performers who are focused on their fans and also hungry to win.”

FanPrint offers partner athletes a one­-stop shop for in­house design, production, promotion and distribution, allowing athletes to take full control of their branding, and if they choose raise money for their favorite charities. Other founding partners include Jozy Altidore, star striker for the US Men’s National Soccer Team and power forward Kenneth Faried of the Denver Nuggets.

Fans of all NFL athletes and teams can browse through FanPrint.com to find designs for their favorite players or submit concepts of their own.

About FanPrint
FanPrint is a Dallas ­based e­-retailer of assorted licensed goods ­ including soft­goods approved by NFL Players Inc. (NFLPI). It is the first and only NFLPI licensee to direct its licensing royalties to the Gene Upshaw Players Assistance Trust Fund enabling fans to show their support for their favorite football players and teams while shopping with a charitable purpose. FanPrint works with a wide range of talented graphic designers to create original designs for every NFL player. Three ­time Super Bowl Champion, five ­time Pro Bowler and ESPN NFL analyst, Darren Woodson, is the company’s Director of Business Development and a founding investor along with FanPrint’s CEO, TK Stohlman.

About The Professional Athletes Foundation
The Professional Athletes Foundation was established in 1990 to assist former players in need as they worked to transition from their active playing careers in the NFL. The grant assistance arm known as the Gene Upshaw Players Assistance Trust Fund (GU PAT Fund) has assisted approximately 1,800 Former Players to the tune of $13 million since its inception. For more information please visit yourpaf.com or contact us at professionalathletesfoundation(at)nflplayers(dot)com.