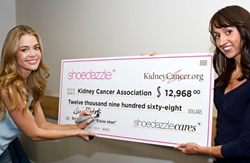 We’re grateful to Hollywood star Denise Richards...for helping to bring much needed awareness to kidney cancer, the disease that took her mother’s life.

March is Kidney Cancer Awareness Month and the Kidney Cancer Association (KCA) and its nearly 90,000 members in more than 100 countries are celebrating by honoring the many collaborators who have helped to make it the largest organization of its kind.

Since its founding in 1990 by the late Eugene P. Schonfeld, Ph.D., KCA has developed scores of highly effective relationships with organizations and institutions around the world.

Carrie Konosky, KCA Vice President for Development, says, “By working with others who specialize in helping people whose lives have been touched by renal cancers, we’ve made remarkable strides in the development of new medicines, along with advancements in surgery, along with helping patient families to manage the psychosocial aspects of dealing with cancer.”

Among the earliest collaborations were those that brought medical experts on board as advisors to KCA. Doctors and researchers from Memorial Sloan-Kettering, University of Chicago, Loyola University, Cleveland Clinic, M. D. Anderson Cancer Center, and other major academic centers were among the first to join this effort. Soon faculty from West Coast institutions joined, followed by doctors from the major European centers.

In the 1990s, KCA joined the Washington, DC, based Cancer Leadership Council, where others with a shared interest in the eradication of death and suffering from cancer gather monthly to work on a common advocacy agenda.

Members of KCA have served on the governing board of Friends of Cancer Research, and as advisors to the director of the National Cancer Institute through the Director’s Consumer Liaison Group.

“Obviously, there are too many KCA collaborations for us to list, " Konosky says. “These relationships will be evident to anyone who visits our website. Recently, we began working with Lotsa Helping Hands, a group that facilitates online connections for families that need help dealing with routine tasks because of a loved one’s experience with kidney cancer.”

KCA also collaborates with two groups that help patients to raise funds for medical expenses. Details are available on the charity’s home page, where information about one-to-one patient support through Imerman Angels may also be found.

Konosky adds, “We're grateful to Hollywood star Denise Richards, one of our newest directors, for helping to bring much needed awareness to kidney cancer, the disease that took her mother’s life in 2007. Denise has been wonderfully supportive in helping us to raise funds, so that KCA's work can continue.”

KCA CEO, Bill Bro, a 25-year kidney cancer survivor, serves as a member of National Cancer Institute’s Renal Cancer Task Force, as well as an advisor to the Kidney Cancer SPORE, a federally funded research program based in Boston.

“During Kidney Cancer Awareness Month, we want to make the public aware of the numerous collaborations that KCA has developed to assist people who are dealing with cancer. Our highly effective partnering with major cancer foundations has resulted in the funding of numerous research awards to young investigators who will become super stars in this field,” Bro says.