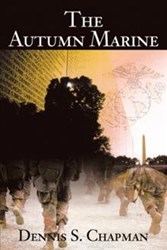 “The book offers a view of one man’s experience as a combat Marine during the Vietnam War,” writes Chapman. “It is not critical of United States involvement in a controversial war."

For author and U.S. Marine Corps veteran Dennis Chapman, the Vietnam War changed his entire perception on life and taught him lessons and skills he never dreamed of. In his new biographical novel, “The Autumn Marine” (published by iUniverse), Chapman shares his personal experiences with future generations and soldiers through the story of a young soldier.

“My desire was to describe my experiences as a U.S. Marine so my family would know what I experienced during my time in the military,” explains Chapman. “The book is written as a biographical novel. I learned leadership lessons in the Marine Corps, sometimes painfully. I want to share those lessons with current military personnel who might benefit from my experience.”

“The Autumn Marine” details the experiences of Sgt. Steve Canon, a young college student fueled by patriotism who enlists in the Marine Corps. As the Vietnam War escalates, Steve is sent overseas as a combat leader, leaving his proud but worrying family behind as well as a young woman who has touched his heart. With his family’s love and honor driving him and his new friend giving him strength, Steve must lead his troops into the siege of Khe Sanh.

Chapman’s character offers a unique perspective on the Vietnam War and life in a Marine Corps troop. “The book offers a view of one man’s experience as a combat Marine during the Vietnam War,” writes Chapman. “It is not critical of United States involvement in a controversial war. It rather focuses on the learning and growth made possible by great adversity.”

About the Author
Dennis S. Chapman was born and raised in northern Michigan. He served in the United States Marine Corps from 1966 to 1970 and holds a B.S. and a M.Ed. degree. He worked for 30 years as a classroom teacher, 10 years as a member of a Mountain Search and Rescue Team and 12 years as a deputy sheriff. He has previously published “A Scout’s Salute” and “9-11: A Mountain Rescue Honor Guard’s Reflection.”

iUniverse, an Author Solutions, LLC. self-publishing imprint, is the leading book marketing, editorial services, and supported self-publishing provider. iUniverse has a strategic alliance with Indigo Books & Music, Inc. in Canada, and titles accepted into the iUniverse Rising Star program are featured in a special collection on BarnesandNoble.com. iUniverse recognizes excellence in book publishing through the Star, Reader’s Choice, Rising Star and Editor’s Choice designations—self-publishing’s only such awards program. Headquartered in Bloomington, Indiana, iUniverse also operates offices in Indianapolis. For more information or to publish a book, please visit iuniverse.com or call 1-800-AUTHORS. For the latest, follow @iuniversebooks on Twitter.
###