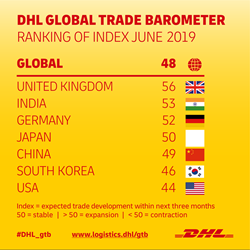 For the first time since its launch in January 2018, the DHL Global Trade Barometer indicates a slight contraction of worldwide trade for the next three months. These losses led to an overall drop in the world trade outlook by -8 points, to a new index value of 48. In other words, world trade – forecasted by trade flows in intermediaries and early-cycle commodities – is expected to decline in the coming three months, albeit mildly. The overall decline was driven by significant losses for both air and containerized ocean trade, which are the GTB’s two fundamental constituents. Air trade declined by -6 to 49 points, and containerized ocean trade by -8 points to 48 index points.

Sluggish trade momentum for several quarters in a row

The latest developments continue a downward trend which the GTB has been recording for several quarters since mid-2018. The current contraction is also the first one since 2015, when the GTB – which takes into account historical data from 2013 onwards – measured more than a month-long decline of global trade volumes in the middle of the year.

Commenting on the latest forecast, Tim Scharwath, CEO of DHL Global Forwarding, Freight, said: “Amidst rising US-Chinese tensions, the slightly negative outlook for global trade for the third quarter of 2019 does not come as a complete surprise. The latest GTB clearly illustrates why trade disputes create no winners. Nevertheless, some major economies such as Germany continue to record positive trade growth. And from a year-to-date perspective, world trade growth has still been positive. Hence, we remain confident in our initial prognosis that 2019 will be a year with overall positive, but slower trade growth.” With respect to the implications for Deutsche Post DHL Group, Tim Scharwath further explained: “The GTB is a useful tool for us to anticipate economic developments at an early stage. We are well-prepared to tackle the forecasted developments. Our divisional structure and portfolio as well as our worldwide activities allow us to balance economic effects within the company and remain resilient to changes in global trade dynamics.”

Eswar S. Prasad, Professor of Trade Policy and Economics at Cornell University in Ithaca, NY, USA, comments: “Growth is weakening in the key drivers of the world economy. Most macroeconomic and labor market indicators point to a cooling of U.S. growth and financial market sentiment has been hurt by trade tensions. The Chinese government’s stimulus measures appeared to be stabilizing growth, but persistent trade tensions are again dragging down growth momentum in China. The German growth revival looks fragile while India’s growth has hit the skids, with rising doubts about the prospects of major economic reforms. A synchronized slowdown of the world’s major economies could affect trade volumes, if the uncertainty continues to dampen consumer demand and business investment.”

As one of the parties involved in the current trade disputes, the US saw by far the heaviest losses amongst all GTB index countries, with its outlook declining by -11 points to 44. Those losses were mainly driven by a negative outlook for major export categories. China scores second in terms of losses, with a decline of -7 points to 49 – an index value one point below stagnation. China’s negative outlook was primarily driven by declining imports in several categories, combined with just minor overall export growth. Whilst the trade dispute between the two countries has been a looming, growth-impending threat since the GTB’s launch in January 2018, it has never manifested itself as much as now in actual trade forecasts. Given the US’ and China’s large contribution to the global index, their diminishing trade growth rates contribute to a large extent to the projected global decline. The still rather mild global trade contraction can be explained by the fact that during trade conflicts, trade flows do not merely dry out. Instead, trade routes and supply chains shift into other countries. On a global scale, this partly offsets the negative effects of trade tensions between countries.

In the wake of the overall weakened trade climate, three GTB constituent countries record slower trade growth forecasts while managing to stay above the level of stagnation: Germany has registered a mere -1 point decline compared to the previous quarter and now scores 52, whilst India loses -6 points, resulting in an outlook of 53 points. The UK actually gains +2 points, scoring an index value of 52. Given the still unresolved Brexit uncertainties, this result looks somewhat counterintuitive. It might be an indication that companies are increasingly stockpiling inventories in face of the risk of a hard Brexit at the end of October.

In addition to China, the East-Asian economies of Japan and South Korea record sluggish trade momentum. The index for Japan has fallen by -7 points and now sits at exactly 50, which indicates stagnating trade dynamics. South Korea is the third GTB country with a forecasted decline in trade growth for the next three months: On the back of a mild decline with 49 points in March 2019, the outlook further declined by -3 to 46 points.

The next GTB update will be released End of September.

You can find the press release for download as well as further information on http://www.dpdhl.com/pressreleases

DHL – The logistics company for the world

DHL is the leading global brand in the logistics industry. Our DHL family of divisions offer an unrivalled portfolio of logistics services ranging from national and international parcel delivery, e-commerce shipping and fulfillment solutions, international express, road, air and ocean transport to industrial supply chain management. With about 360,000 employees in more than 220 countries and territories worldwide, DHL connects people and businesses securely and reliably, enabling global trade flows. With specialized solutions for growth markets and industries including technology, life sciences and healthcare, energy, automotive and retail, a proven commitment to corporate responsibility and an unrivalled presence in developing markets, DHL is decisively positioned as “The logistics company for the world”.

DHL is part of Deutsche Post DHL Group. The Group generated revenues of more than 61 billion euros in 2018.