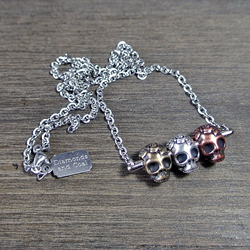 For those who need some grit with their glamour...

Diamonds and Coal (http://www.DiamondsAndCoalJewelry.com), in association with The Artisan Group®, will participate in an exclusive celebrity gift lounge event hosted by GBK Productions, leading up to the MTV Movie Awards telecast. The Gift Lounge will take place on April 8-9, 2016 at an exclusive location in Los Angeles, California.

“This necklace has clean lines yet retains an element of edge and grit,” notes Erin. “It looks great with a t-shirt and jeans, and is the perfect addition to that little black dress. It's also a great layering piece.”

At the Artisan Group exhibit, Diamonds and Coal will have on display a selection of its Sugar Skull Cameos. Hand-painted and surrounded by Swarovski Crystals, these are some of the most popular pieces in the Diamonds and Coal line. Says Erin, “In particular, I’m excited to introduce the MTV crowd to my Calavera Crystals Collection. These are some of my most unique pieces, selling out almost immediately on their release, and feature layers of copper permanently fused to all natural gemstones – I always say they’re made with science and a little bit of magic!” Also on display will be a selection of Bullet Bracelets.

Diamonds and Coal is jewelry designed for men and women who “need some grit with their glamour.” Whether composed with natural gemstones, real meteorites, recycled bullet shell casings or Swarovski Crystals, each piece is done by hand, and thus is its own unique treasure.

Says Erin, "The name Diamonds and Coal came about because the two things are always associated together, yet they convey the exact opposite in their imagery. There is a push and a pull. Our pieces are beautiful yet edgy, dainty yet fierce ….you always get glamour mixed with edge and grit. A little bit of sass with your sparkle. Diamonds and Coal describes jewelry coming together in that harmonious way that you might not expect. “When you need some grit with your glamour,” says it all. It’s personality. It’s flare. It's the fierce edge you want for the look you've always desired.

Diamonds and Coal has been sold to customers in over 25 countries. It has been worn by numerous individuals in the entertainment industry, including rock stars and professional wrestlers.

Shop Diamonds and Coal at DiamondsAndCoalJewelry.com and at brick and mortar locations including the Harley Davidson Cafe and TAO Restaurant at the Venetian in Las Vegas; Hip Replacements Asheville, NC; and Chameleon Colors Salon in River Edge, NJ.

*Neither Diamonds and Coal nor The Artisan Group are officially affiliated with MTV or the MTV Movie Awards.

ABOUT DIAMONDS AND COAL
Diamonds and Coal Jewelry (http://www.DiamondsAndCoalJewelry.com) is for ladies and gents who need some grit with their glamour. Every piece is unique, and is handmade using a variety of materials – gemstones, meteorites, recycled bullet shell casings, Swarovski crystals and more. Whether you want to deck yourself out in spikes and studs, skulls and crystals, or bullets and bling, your Diamonds and Coal piece will help you sparkle a little prouder and scream a little louder wherever you go.

ABOUT THE ARTISAN GROUP
The Artisan Group® (http://www.theartisangroup.org) is a premier entertainment marketing group dedicated to representing small business artisans at the best celebrity gift lounges and press events. The organization provides a collective sampling of handcrafted products to celebrities and members of the press at top luxury gift lounges such as those leading up to The Academy Awards, The Golden Globes, The MTV Movie Awards and The Primetime Emmys.

The Artisan Group also coordinates product placement of its member's handcrafted products on such hit television shows as The Voice, The Vampire Diaries, Days of Our Lives, The Young & The Restless, Modern Family, Jane The Virgin and Law & Order: SVU, among others. Membership in The Artisan Group is juried and by invitation only.