Author Diane M. Cece continues the story of two ex-outlaws who tries to live a life far from the shadows of their dark past. 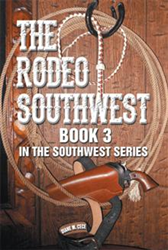 With her great love and fascination with the old frontier West and the rodeos, author Diane M. Cece has superbly written and sustained the Southwest Series that is now on its third book. “The Rodeo Southwest” continues to tell the life of ex-outlaws Tom Lacey “Nevada Kid” and Samuel “Smokey” Embers after they were both released from prisons.

After serving five years inside the cell, Smokey was released ahead and Nevada had to stay another two years because of misbehavior inside. After serving his full sentence, Nevada became free and headed southwest, joining the Broken Arrow Ranch rodeo circuit to make some fast money, hoping to reach the goal he set for himself of buying a cattle ranch. Just when Nevada is focused to have a new and straight life, he runs into old enemies and a mystery of who is cutting cinch straps to make a planned murder look like a rodeo accident.

Intriguing, readers are compelled to read on and find out what will happen to Nevada’s quest to better himself and acquire a ranch — a dream that may seem too big for an ex-outlaw to achieve. A story of reaching for one’s dream and of perseverance, “The Rodeo Southwest” is not another rodeo tale but a story of man and his ambition to better himself even after a series of past mistakes and terrible choices.

About the Author
Diane M. Cece was born and raised in a small New Jersey town and was descended from a large Italian family that originated in San Potito Ultra, Avellino, Italy. Her ancestors were avid fishermen and farmers. After retiring from twenty-five years of federal service, her interests turned to her love for history and writing. She started a second career at small Waterloo Village in northern New Jersey and became a historical interpreter and continued on as a seamstress, designing and manufacturing historically accurate custom eighteenth-century-period clothing. Joining a Civil War Living History and Reenactment Group, the 27th Regiment of New Jersey Volunteer Infantry, Company F, nicknamed “Bailey’s Boys,” she moved on to living history interpretation. Her love for the Old West continued on throughout her life, loving the energy, the Western movies and local rodeos offered her, and living her own life around the unspoken code of the West. She was a fan of country music her whole life and was an unpublished songwriter and member of the Nashville Songwriters Association International. But that wasn’t enough because she did Texas round dancing for twenty years and for a short time taught the two-step, line and couples’ dances in her home state. Her other interests besides dancing include archery, shooting sports, and game fishing, all of which she has done.